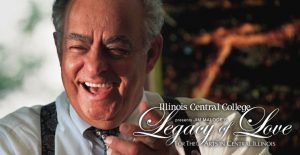 The Illinois Central College event “Legacy of Love for the Arts in Central Illinois” honors the life of the late Peoria Mayor Jim Maloof who died at age 93 in 2013. (Courtesy of ICC)

The event, to be held on Mon., April 16 at 6 p.m., raises money for the St. Jude Children’s Research Hospital in Peoria.

This one-of-a-kind showcase of entertainment, now in its sixth year, it will be held at the Performing Arts Center on the ICC East Peoria Campus.

This one-night only event is a family-friendly showcase of the performing arts in the area and is designed to raise money and highlight former Mayor Maloof’s local and national legacy for St. Jude Children’s Research Hospital. The entire event is planned and executed by Illinois Central College students each year.

Seating and tickets are limited to the capacity of the venue. All proceeds from ticket sales will benefit St. Jude Children’s Research Hospital. Additional donations also will be accepted through a free-will offering for St. Jude collected shortly before intermission. 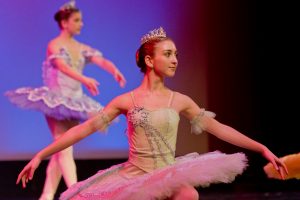 The Peoria Ballet Company is celebrating over 50 years in dance performance and dance education. The group will perform at Jim Maloof’s Legacy of Love benefit for St. Jude’s Children’s Research Hospital on Monday, April 16 at Illinois Central College. (Courtesy of ICC)

Several professional musicians from the Heartland Festival Orchestra will also be performing, as well as the Normal Community West Dance team, which will perform its regional and national award-winning routines. Special performances by the Maloof Sisters, Markie and Michy Maloof, will round out an evening of fast-paced, inspiring and show-stopping local entertainment. Speeches from St. Jude families also will be featured. The evening is sure to entertain audiences of all ages and will highlight Maloof’s involvement in both the Peoria area arts and in the founding of the St. Jude Peoria Affiliate. Former Mayor Jim Maloof passed away on Jan. 19, 2013.

A cookie and lemonade reception sponsored by Chick-fil-A will be offered at the close of the program, and participating organizations will showcase upcoming and past performances through interactive displays located in the lobby.

Tickets are required for admission and cost $7 for all ages. Tickets can be purchased in advance at ArtsAtICC.com or through the ICC Performing Art Center Box Office at 309-694-5136. Contact Brent Goken at 309-694-5107, or Matt Alwan at 309-657-4081.  Visit the event’s Facebook page at ICC Presents: Jim Maloof’s Legacy of Love for the Arts:  facebook.com/malooflegacyoflove