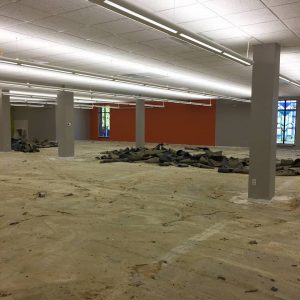 In March, Morton Public Library began a six-week, $226,500 renovation project to modernize the 19,000-square-foot building. Once complete, the library will feature new restrooms, an expanded children’s area and a dedicated space for teens and tweens. The project is financed by library reserve funds.
(Photo courtesy of Pekin Public Library)

It’s been 20 years since the public library in Morton has had any major renovations, and when it reopens in May, it should be nicely “freshened up” according to staff.

On March 24, Morton Public Library was temporarily closed to the public and emptied of its contents so work could begin on a $226,500 Library Refresh project to modernize the 9,500-square-foot Pershing Street facility.

According to Morton Library Director Alissa Williams, more than 80,000 books had to be stored away, along with around 17,000 audio-visual items, as well as all of the library’s reference materials.

“All the books went into storage with Federal Companies. They pulled things out in sections, so that it all fits back in nicely,” she said. “There will be a more open and welcoming lobby section, the new books and magazines will be moved to the front and more open space when you come into the library.”

Part of the space Williams is referring to is the front area where the children’s section was previously located. The children’s area will be relocated to the back of the library, where young readers will have a dedicated program room and access to Hannah’s Reading Garden, which was funded in 2015 by Dan and Lynne Walters in honor of their granddaughter. An additional space has been added for tweens and teens, Williams said.

“The teens and tweens have been in the back of the adult section, and now they’ll have their own dedicated space within the library,” she explained. “It will have all of the reading material and space to collaborate on school projects.”

Along with improved, dedicated spaces, the restrooms and walls will have a face lift. Carpeting will be removed and replaced, she said, the walls will have a fresh coat of paint and the bathrooms will be completely renovated with new tile floors. The money, she said, comes from the library’s reserves, which have accumulated since the building’s previous modernization in 1998.

Williams is no stranger to renovations of this scope. Before coming to Morton, she served as assistant director of Pekin Public Library three years ago, when the facility underwent a $6 million renovation and expansion. 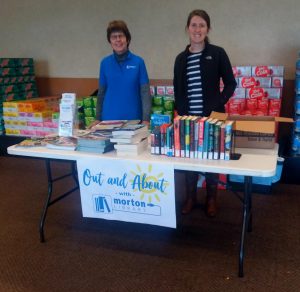 Morton Library staffers Ann Sandos, right, and Lindsay Funk were at Kroger on Jackson Street April 19 to reach out to the community while the library is undergoing substantial remodeling. The library will reopen in mid-May. (Photo by Holly Eitenmiller / for Chronicle Media)

In Morton’s case, the wait is only six weeks.

“We have great community support and people have been very excellent and patient,” Williams said. “I know it’s inconvenient for the library to be closed, but we’re staying very active with the community through this project.”

Morton Library is heavily trafficked, she said, and to minimize the disruption of its services, some programs have been maintained at other locations, and staff members have frequently visited businesses to answer questions, read stories and provide limited reading materials. Friday Toddler Time has been held at Morton Park District’s Freedom Hall on Birchwood Street, and will continue there until the library reopens. Chapter Chatters Book Club also meets at Freedom Hall as scheduled.

Staff also regularly visit Eli’s Coffee Shop each Monday, and have sporadically visited other locations around town, such as Kroger on Jackson Street, and will continue to

“We’ll hopefully do some pop up programs, and do some fun stuff at the parks and in the community, before we reopen, now that the weather’s nice,” Williams said.