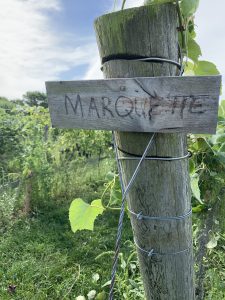 On Sept. 3, the Washington City Council unanimously approved a special-use permit for a winery at the Tarvin Farm property there, and when Bob and Lisa Barry finish digging the dirt, rows of grain and beans will be replaced with grapevines. It will be called Tres Rojas Winery, and will serve as a venue for wine lovers. (Photo courtesy of Lisa Barry)

There will be new crops being grown on the former Tarvin Farm Property in Tazewell County.

On Sept. 3, the Washington City Council unanimously approved a special-use permit for a winery at the property, and when Bob and Lisa Barry finish digging the dirt, rows of grain and beans will be replaced with grapevines.

Tres Rojas Winery is the fruit of four years’ devotion to a small plot of land at the Red Barn Tree Farm on Allentown Road in Pekin, where the Barrys honed their skills with the vine. Russ Roth once grew grapes there, and his grape lines were there when the couple forged an agreement with the Roth family to resurrect the vines.

Only two things change the landscape east of Washington on Cruger Road, corn and soybeans. At least until next year.

“It had been abandoned, and they allowed us to work with it,” Lisa said. “So, we cut down a lot trees that had grown, replanted, and we just pulled our first commercial harvest.”

Roth had grown table grapes. The Barrys replaced most of that variety with a spectrum of others; Leon Millot, Sayval Blanc, Traminette, St. Croix, Edelweiss.

“The varieties we can grow are conducive to the climate, but they’re typically not names you’ve heard of,” Lisa said. “My husband has his degree is in biology, he has done a lot of plant management, his father had a kiwi vineyard and is very well versed in growing plants vines trees.”

Bob grew up in Temecula, California, a southern California region that became known as a “wine country” when it was officially deemed an American Viticultural Area in 1984. The Barrys joke about it.  “Had his dad only grown grapes instead of kiwi,” Lisa jokes.

Still, the experience came in handy for the Barrys, and the couple have well over 600 cases of wine in wait for spring, when Tres Rojas is expected to open. They have allowed some of the inventory out of the storehouse for retail at a few local stores.

“We’re in Yogi’s and the Liquor Station in Morton, Hy-Vee in Peoria, we have wines at UFS,” she said. “We haven’t pushed the retail liquor sales because we do want to hold onto our inventory.”

Wine lovers hoping to have a taste of the Barrys’ vino should be prepared for a dryer weight. Because much of the regional wines tend to sweeter, took aim at adding a moderately dry line of wines to the local pallet.

“We chose varieties that were typical dry red wines, and we found that we did that pretty well. Our wine list will be dry, but we will have sweet,” Lisa explained, “Currently we’ve made a Chardonnay, Pinot Grigio, Pinot Noir, Malbec, Sangiovese.” 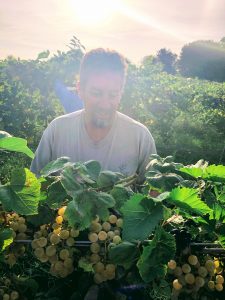 Bob Berry, of Tres Rojas Winery, grew up in Temecula, California, a southern California region which became known as a “wine country” in 1984. Not knowing the fortune that could have been had in growing grapes, his father grew kiwi. Bob’s wife, Lisa, makes light of it, “Had his dad only grown grapes instead of kiwi.s” (Photo courtesy of Lisa Barry)

The Barrys plan to bring in grapes from California and the New York Finger Lakes Region to make Reislings and Cabernets, but they will also grow varieties of Illinois grapes. The grapelines, she said, will be fashioned to frame a venue on a hill facing west for a sunset view.

Groundbreaking for the venue beings this fall, and by January, the slab and frame will be ready to finish in early spring. The Barrys will offer a tasting room with a long, accommodating bar and tables, a retail area, an event room that seats 90 and a patio overlooking the vineyards.

Those who know the area can expect to enjoy the occasional appearance of radio controlled airplanes sailing by. The Washington R/C Flyers are neighbors, and the hobbyists often visit the club on nice weather days. For hands-on entertainment, the Barrys will host tours and offer wine making classes.

“We’ll have a lot of ideas on how people can become involved and learn about wine and expand their palettes,” Lisa said. “We’re also close to the highway, and very accessible to the area. We’re really excited about how things will come together, and being a venue for the surrounding area.”