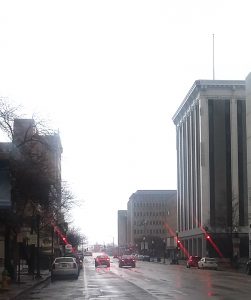 Originally slated for demolition by Caterpillar, Inc., the century-old building at 124 SW Adams St. in Peoria, right, has been sold for $1 by the company to OSF St. Francis Medical Center instead. In April 2017 Caterpillar officials announced the company’s intent to move its headquarters from Peoria to Deerfield, nixing previous plans to develop that block of Adams Street. (Photo by Holly Eitenmiller / for Chronicle Media)

When Caterpillar, Inc. announced its plans to make tracks from Peoria to Deerfield last year, many were left to wonder what would be left of downtown Peoria and the company’s big plans for redeveloping its headquarters there.

In a move to make good on its vow to bring vitality to the city, Caterpillar announced Jan. 11 it will collaborate with OSF HealthCare of Peoria to transition the property once slated for its headquarters into OSF Ministry Headquarters.

“It’s a really good day here for Peoria … on behalf of Caterpillar, we’re really thrilled to be working with OSF HealthCare on this project I can’t think of a better partner. The mission that OSF service, we shouldn’t take it for granted, it’s extremely important to the community and extremely important to Peoria we love working with them,” Caterpillar CFO Brad Halverson said at a press conference Thursday. “We promised that we would work with the city in terms of developing the former Chase building … again, we think this is a good partnership, there are thousands of people in Peoria developing, it’s going to be great for Peoria and great for downtown.”

Caterpillar had planned to redevelop a portion of Adams Street to make way for a sleek, modern headquarters. In doing so, the former Chase Bank building and additional structures at 124 SW Adams were slated for demolition, but when the company opted to transition its headquarters to northern Illinois, those plans were nixed.

Instead, “Big Yellow” sold the property it bought several years ago for $1.5 million to OSF HealthCare for $1. Additionally, the company will take the estimated demolition costs of $3 million and hand it over to OSF to assist in renovating the century-old building.

“It’s more than a ministry headquarters for OSF, it’s really about the rehab of the block and brining more amenities to downtown that support the employees of Caterpillar and the mission partners of OSF who will be relocated down here,” OSF HealthCare CEO Bob Sehring said. “It’s anticipated the construction will take at least several years, there’s much work to do on the inside, but we’re looking forward to that.” 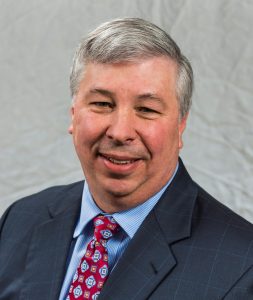 The new headquarters will replace various buildings in Peoria that OSF currently leases, Sehring said, and it’s estimated that around 700 members of health care community will share the seven-story, 225,000 square-foot building.

“We will bring many of our administrative mission partners together,” Shering said. “We’ll recreate the opportunities they’ve had to bring mission partners together in a collaborative space rather than spread all around the city, for the benefit of, certainly, all of our ministry that spreads across Illinois, but also we hope for the aid and the benefit of the city.”

Peoria Mayor Jim Ardis gave a nod to State Senator Dave Koehler and State Representative Jehan Gordon Booth for helping pass “significant historic legislation and tax credits through the General Assembly.” With renovation costs estimated at $90 million, such benefits are critical, he said, for the success of the project.

Built in 1909 by John F. Schipper and Henry C. Block, “The Big White Store” was the tallest in the city then, and housed the Schipper & Block department store. The name changed to Block & Kuhl, then, later, Carson Pirie Scott before it became known as the Chase Bank Building. More than 33 years before its construction, The Sisters of the Third Order of St. Francis began caring for patients at an Adams Street home.

Since then, OSF HealthCare has become an integrated health system comprised of 11 acute care facilities and two colleges of nursing, employing nearly 700 physicians and 300 advanced practitioners. It is home to St. Jude Children’s Hospital Midwest Affiliate. According to Sehring, during his tenure OSF has seen an increase of 11,000 employees and has grown from five hospitals to 11. 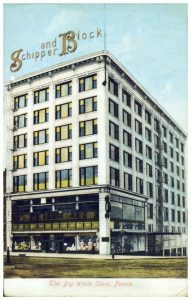 “Caterpillar promised they would commit everything they could to work with this community … the OSF Ministry Headquarters will be a real game-changer for downtown Peoria,” Ardis said. “We thank Bob Sehring and the sisters for their vision and commitment to really contribute to the community. OSF made a very conscious, deliberate choise to reinforce that commitment to that mission and their home in Peoria. It’s teamwork the way it’s supposed to be done, and of us should be very proud. Thank you Cat and thank you OSF.”

Sehring agreed that the project is a continuance of the OSF mission.

“We thought about this project, specifically this building, and then we began to think about the history of the sisters and when they were first asked to come to Peoria,” he said. “It really was to establish health care, and the sisters did, in a very small house up on South West Adams, so in many respects, this is a bit of coming back home again … returning to downtown, within a very short distance from where the sisters first established the health care facility.”

Several hundred “well-paying” construction jobs will be generated by the project, Ardis said. “This will return downtown to a place that’s vibrant, active and energetic.”