After East Peoria councilman Mike Sutherland, far right, commented, “I’ve never known anybody to ever die of a drug overdose that didn’t start out with cannabis,” during the August 20 cannabis working session, Dan Atherton rebutted, “Mr. Sutherland …  I started smoking cannabis when I was 18 years old. Smoked it for 40 years. You’ve worked with me. How did I perform? … Some people are here on assumptions, I’m here with experience.”
( East Peoria City Council Facebook broadcast)

Chances are, when retail sales of recreational cannabis begin on Jan. 1, 2020 pot enthusiasts will line up like Black Friday shoppers at the nearest retailer. The main question is, where will those shops be?

On Saturday, Aug. 24, the Peoria City Council convened for more than three hours to discuss the multitude of mandates and options that rest within the 660-page Cannabis Regulation and Tax Act that Illinois Governor J. B. Pritzker signed into law June 25.

“We know that this isn’t for everybody, but it’s here, and it’s legal, it’s not going to go anywhere,” State Rep. Jehan Gordon-Booth (D-Peoria) said at the meeting. Gordon backed the cannabis bill, and considers it an “unprecedented” fiscal opportunity for the city. “We want folks to be able to look at this in a way that it’s an opportunity.”

Indeed, when City of Peoria Deputy Corporation Counsel Chrissie Peterson began talking numbers, the overall tone of the session waxed optimistic. Illinois will permit municipalities to impose a three percent tax on recreational sales. That, combined with a 1 percent state sales tax and Peoria’s Home Rule tax of 1.75 percent, the city could make a 7.75 percent draw on sales.

“We know that the medical dispensary in Quincy was doing about $4.5 million for medical sales, and we have about twice as many patients here,” Peterson explained. “I was able to speak with the owner of our medical cannabis facility yesterday, and we agreed that we thought $10 million was a reasonable estimate to use … that would be the equivalent of about $575,000 in new tax revenue.”

A brief, stupefied silence followed Peterson’s projection, and someone in the chamber let out a low whistle. Tax revenues of that number would certainly have an impressive impact on the city’s budget woes.

Illinois, however, has cautioned municipalities against imposing a tax rate that might prohibit sales. Illinois has already established hefty sales taxes on cannabis, taxes based on tetrahydcocannabiol (THC) levels. Products with THC levels below 35 percent will be taxed at 10 percent, those above it, 25 percent and infused products will be taxed at 20 percent.

“I think one of the reasons the state is leery of people going to 3 (percent) is that the tax will be so high that the current illegal market will be maintained at a much lower cost,” At-Large Councilman John Kelly said. “That’s really the state’s concern.” 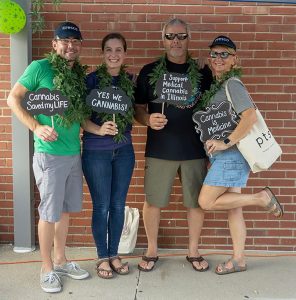 On Jan. 1, the Illinois Cannabis Regulation and Tax Act will allow the recreational sales and use of cannabis. City of Peoria officials met Aug. 24 in a working session to clarify what the city can permit, limit or prohibit regarding recreational cannabis. The overall tone of the meeting was optimistic, and several employees of the Peoria dispensary Trinity Compassionate Care Center spoke favorably of the impact medical cannabis has made in their lives. (Photo courtesy Trinity Compassionate Care Center).

Peterson agreed, but said only one municipality, the LaSalle County village of Sheridan, has adopted a cannabis sales tax lower than 3 percent. Hard numbers, she said, still are difficult to pinpoint, and the city’s revenues could possibly be half or double the projected number.

In a loose comparison, the City of Pueblo, Colorado, which has a population very near Peoria’s, announced its first full-year revenues from cannabis sales earlier this year. On February 19, the Pueblo Chieftain reported that more than $1 million in revenue was pocketed by the city from recreational sales.

“The city received approximately $621,000 in revenue from recreational pot sales last year, and $335,192 in fees associated with licensing, renewals, transfers and miscellaneous fees from 26 different marijuana licenses,” the article read. “Those 26 marijuana operations also generated $130,000 in revenue from conditional use permits issued by the city’s planning department … that means $1,086,192 in total revenue was generated from marijuana license holders in 2018.”

Granted, many aspects influence potential recreational cannabis revenues for Peoria, including whether the city will grant permits to infusers, craft growers, processors, or places of public consumption, which include vape shops and wellness centers that use THC-infused therapies

The city council has until September 30 to adopt a Municipal Cannabis Retailers’ Occupation Tax, though that doesn’t’t mean recreational cannabis sales will be permitted in Peoria. Without a MCROT in place, the city won’t be able to draw tax revenues in 2020, should the council permit recreational sales in the near future.

In the meantime, the city council has a long way to go on which direction to take in matters of zoning, licensing and what to permit, restrict or prohibit in recreational sales, but Mayor Jim Ardis urged citizens to remain involved. Neither the council or the public spoke unfavorably of recreational cannabis at the session. No votes were taken.

“The council may direct staff to hold public hearings so that other people in the community that weren’t’t able to participate or listen in today, that’s our prerogative to do that, and I’m sure we will do that,” Ardis said. “In terms of the public there’s going to be plenty of time for input and questions.”