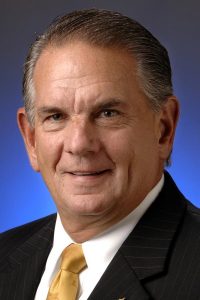 It’s been two years since former Peoria County Sheriff Michael McCoy took over as the permanent chief of the Washington Police Department, and while on the face of it the job is much different than his previous position, it’s no less challenging.

“Of course, I don’t have a jail, a courthouse or an airport, and no contracts with other communities,” he said, “so things are different, but the pace is not any slower.”

In January 2017, Papis was followed by another former police chief, Ted Miller of Pekin, who remained until McCoy took over for good on June 30 of that year.

At first, McCoy was simply helping City of Washington officials in the hiring process by reviewing applications.

“A day before the applications deadline, he called and said, ‘You and I need to talk,’ Washington Mayor Gary Manier said, adding, “We’re very fortunate to hire him.”

Police work is known for its paperwork, and McCoy’s work in Washington has leaned toward the heavy side of paper shuffling.

Straightaway, he concentrated on defining and coordinating administrative duties, while developing a better understanding of department rules and policies.

When he spied city ordinances that were creating more harm than good, he worked with city officials to iron out the wrinkles and foster more efficient municipal processes.

McCoy said the Police Department also continues to work with the street, water and fire departments to ensure resident’s safety, although ensuring everyone’s safety also comes down to the residents themselves.

“Some residents don’t seem to feel that laws don’t apply to them,” he said. “Our point of emphasis on this has been handheld devices.”

The problem with texting and talking on cell phones while driving became so prevalent that, on July 1, the police department ended its use of citation warnings.

All drivers who violate cell phone laws are now handed tickets that carry a $164 fine and are posted to their driving record.

A new Illinois state law restricting texting and phone use while driving went into effect July 1.

Because of ongoing problems with drivers speeding on Illinois Rte. 24 and other main arteries through Washington, McCoy has amped up police presence on those roads.

“We’ve been running radar and writing tickets, because a large percentage of people speed through these areas at more than 10 miles per hour over the speed limit,” he explained. “We have these roads where people still pull out in front of other people and run stop signs and it’s not safe for people to enter and exit Washington.”

A priority for McCoy is developing solid relationships with the community, through programs and outreach efforts.

“One of my biggest points of emphasis is that we are part of the community,” he said. “As an example, our K-9 does legal duties, but we like to take him out into the community.”

Thor, Washington’s police dog, has not only become well-loved by residents, he has also proven himself formidable in his duties. During a July 4 traffic stop, Thor sniffed-out two loaded and illegally-owned handguns.

To bring awareness of such crimes to residents, McCoy designated officer Germain Taylor as the community policing officer. Taylor is a D.A.R.E. educator who also coordinates community projects, including the department’s annual Night Out Against Crime.

McCoy said this year’s Night Out Against Crime will be more involved than any of the former events. There has been a resurgence in vehicle break-ins, as well as other petty crimes, so the department’s goal, he said, is to increase prevention awareness.

“We’ll have this before summer is over, and this year it will be a lot bigger and encompass a lot more for people do and see,” he said. “We’re going to have police vehicles and motorcycles, the K-9 unit, face painting. We want to make people aware of how to be safe and learn more about what we can do to prevent crime in Washington.”