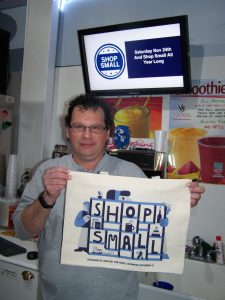 Joe Harper, co-owner of Little Land of Candy and More in Chillicothe, has participated in Small Business Saturday for each of the five years his downtown retail store has been in business. Harper said the store sees an uptick in business on SBS, particularly among American Express cardholders. (T. Alexander photos)

Its name belies its power: Small Business Saturday (SBS), originated by American Express in 2010 as a mom-and-pop store’s answer to Black Friday, is now big business.

In 2018, there are around 7,500 Neighborhood Champions, or businesses and community organizations that have pledged to rally their communities with events and activities promoting SBS.

In 2013, there were just 1,400 Neighborhood Champions. The movement has led to the formation of a national Small Business Saturday Coalition, consisting of hundreds of business associations, nonprofit trade groups, municipalities, and public officials who have committed to encouraging consumers to Shop Small.

In the eight years since its inception, U.S. customers have reported spending an estimated $85 billion at independent retailers and restaurants on SBS, over just eight total days.

In addition, U.S. small businesses are believed to be responsible for $4.8 trillion in gross domestic product — equivalent to the third largest economy in the world — according to a new study from American Express.

“What began nine years ago as an effort to support local stores during the holiday shopping season has become the Shop Small movement, bringing together millions of shoppers, small businesses of all kinds, civic leaders and organizations in thousands of towns and cities across the country,” said Elizabeth Rutledge, chief marketing officer for American Express. “When we spend local, small businesses thrive. And when small businesses thrive, we all thrive.”

Nov.  24 is the date of the ninth annual SBS, which is being embraced by virtually every central Illinois community with a shopping district.

In Eureka, the Woodford County seat, SBS is being celebrated through a day and evening-long slate of events centralized at the Eureka Public Library.

“SBS is always the Saturday after Thanksgiving, and we have Santa Claus at the library and free carriage rides around town,” said Deanna Davidson, president of the Eureka Business Association. “These events, along with hot chocolate and snacks, are from 1-4 p.m. But following that, the Eureka Events Committee hosts the annual tree lighting at the courthouse. SBS also serves to kick off our holiday scavenger hunt involving participating small businesses.”

Upwards of 300 people entered the Eureka Library to participate in SBS events in 2017, so it is no big wonder that small businesses and small communities are flocking to embrace the date.

It is estimated that around 67 cents of every dollar spent at a small business remains in the local community, generating tax revenue, jobs, and growth within those communities.

In an AMEX survey, 90 percent of consumers said SBS has had a positive impact on their community.

In Peoria Heights, Mikayla Vincent, new lead office coordinator and facilitator for the Heights Chamber of Commerce, is looking forward to seeing how her first effort at promoting SBS in the community fares. “We have distributed a load of SBS promotional marketing materials over the last several weeks to all of our interested businesses. I have been promoting the event via email, Facebook page and our Instagram account. For 24 days, I have been posting reasons why it is wise and just a good idea to Shop Small,” she said.

A number of new businesses and a few existing ones have joined the Peoria Heights Chamber of Commerce in the past year, according to Vincent, including the Hidden Closet Boutique, Slim Pickens, Global Village and Brienzo’s Wood Fired Pizza. In addition to the numerous independent shops, bistros, bars and haberdasheries located in the downtown Heights shopping district, other outlying small businesses, such as Gregg Florist, are also participating in SBS by staying open later and-or offering advertised special discounts.

In addition, Marcia H. Lievenow, a concertmaster with the Peoria Symphony Orchestra, will be popping in at participating SBS retailers in Peoria Heights from 2 to 4 p.m., offering impromptu violin performances at each stop.

In Morton, SBS serves to close out the business community’s annual, weeklong “Hometown Holidays” celebration. A full listing of events can be accessed on the “events” tab on the Morton Chamber of Commerce website, said LeighAnn Brown, Morton COC coordinator. Several new small businesses in the Tazewell County city have been welcomed by the Chamber in 2018 and will be participating in their first SBS, including Unum, a fine wine and whisky lounge, Mr. and Mrs. Furniture, and Be You-nique Designs, a DIY craft and party store. 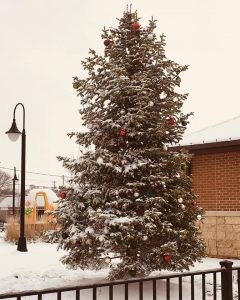 Morton, along with Pekin, Washington, Chillicothe and a number of other central Illinois communities, is part of the ShopLocal365 movement, which encourages consumers to continue to embrace the spirit of SBS year-round.

This is important to small communities for many reasons, including the sales tax revenue generated for local governments.

In Pekin, for instance, for each $100 spent at a brick and mortar retailer, the city receives $2.75 and Tazewell County gets 75 cents in tax revenue. An online purchase of $100 nets the city just $0.004, and the county just $0.001 in revenue, according to the Pekin Area Chamber of Commerce.

That discrepancy is one reason communities are urging small business owners like Joe Harper of Chillicothe, who co-owns Little Land of Candy and More, to climb aboard the SBS and ShopLocal365 bandwagons. Harper has participated in SBS in each of the five years his small candy, fudge and hand-dipped ice cream parlor has been open.

While he is appreciative of American Express’ efforts to spotlight small businesses and encourage their growth, and does notice an uptick of business on SBS, there is one thing that Harper would like consumers to know.

“(SBS) brings a lot of American Express customers out that day, because they get extra rewards and things like that. But what a lot of people don’t understand is that when any credit card has a reward program, it is the businesses who pay those rewards,” said Harper. “American Express provides us with signage and gift bags to promote SBS, and we appreciate that, but we would much prefer customers make their purchases in cash.”

Little Land of Candy and More is one of around 300 Neighborhood Champions spread across Illinois communities that are promoting SBS in 2018.

“When shoppers spend locally at small businesses, communities win,” said Juanita Duggan, president and CEO of the National Federation of Independent Businesses. “We encourage consumers to celebrate SBS by shopping at small and independent shops and restaurants. We are proud to partner with American Express to promote small businesses.”

Connect with us LinkedIn