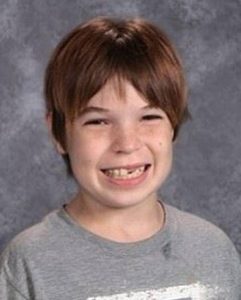 Robert Bee, 13, has been missing from his Pekin home since November 2016.

Human remains found scattered about a south Pekin backyard two months ago have been conclusively linked to missing Pekin teen, Robert Bonsai Bee, Jr., through his parent’s DNA.
The Illinois State Police Forensic Laboratory in Morton completed the tests, and the results were announced on Saturday, Sept. 23 by Tazewell County Coroner Dr. James Baldi.
The boy came missing from his home on Sapp Street in Pekin Nov. 17, 2016, after fleeing from a Pekin Police Dept. truancy officer. His mother, Lisa Bee, reported him missing the next day when a truancy officer returned to issue another ticket for his absence from school that morning.
Shortly after, volunteers formed “Team Bonsai” and conducted regular, diligent searches for Bee, even enlisting the help of Trucks 4 Kidz, a team of volunteers from St. Louis, Mo. which has successfully found 37 missing children.
Bee’s bones, all of which were recovered, were found July 24 on or near 14316 Rte. 29 by someone grooming the lawn. A day later, a forensic pathologist matched the youth’s dental records to the remains, but a DNA match was required to absolutely confirm his identity.
It took time for the lab to complete DNA testing, root out a viable source of his father’s DNA, Baldi said.
His father, whose name also was Robert Bee, Jr., died this year on March 8.
“It was complicated because they needed two samples,” Baldi said. “The father passed away earlier, so it took us a while to run that down. They needed better sampling of the father’s DNA.”
Baldi did not say what the source of that DNA was, or where it was found. DNA from his half-sister Stephanie Clausser was not sourced, Baldi said, since the parent’s DNA was considered “prime.”
Bee’s remains are still housed at the Peoria County coroner’s morgue, where the preliminary autopsy was performed in July. 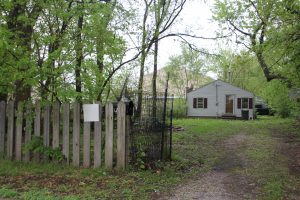 The house at 233 Sapp St. in Pekin remains vacant, at least since Feb. 27 when landowner Gregory Gianessi was granted a Judgment of Possession in Tazewell County. Lisa Bee and her son Robert Bee Jr. lived in the home at the time of his disappearance in November 2016. Bee vacated the house before the eviction, according to an eight-minute video she posted to Facebook two days before the judgment, claiming she was a resident in a drug rehabilitation home. (Photo by Holly Eitenmiller/for Chronicle Media)

Lisa Bee, has consistently been in contact with the coroner’s office, Baldi said, in an effort to gain access to Robert’s remains and provide him a proper burial. An unnamed donor has given the family enough funds to pay for a funeral and burial.
“Finding the cause of death, it’s way too early for that. The remains, now that we know who they are, will be held for further investigation,” Baldi explained. “We’re trying to make sure we have all the information possible and we want to give every opportunity to get as many facts as we can.”

— Tests confirm remains are those of Pekin boy —