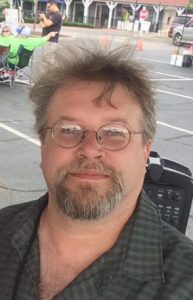 A Washington man has died of injuries sustained two weeks after he was violently attacked during a home invasion.

Pownall was hospitalized at OSF St. Francis Medical Center in Peoria in critical condition after the attack, which happened just after 5 a.m. Sept. 11.

A 35-year-old woman of the same address was also transported to the hospital with minor injuries. Police have not released her name.

The attacker fled in a vehicle stolen from the residence, which was later recovered in South Peoria. Pownall’s Washington home lies within the jurisdiction of the East Peoria Police Department, which is conducting the investigation.

East Peoria Police Chief Dick Ganschow has declined to release information related to the case, but a suspect is being investigated by detectives.

On Thursday, Sept. 27, Jason Miles, of Jay Goldberg Events and Entertainment, posted to his Facebook page, “My heart is broken. Jason Pownall was one of the kindest souls I have ever met. He would have given the shirt off of his back to a stranger in need. I cannot even process what has happened. The world lost one of the good guys today. My heart goes out to his family and friends. Rest easy, brother.”