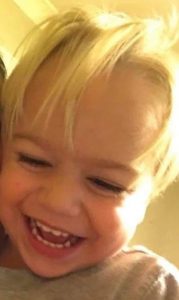 As 4-year-old Tate Thurman lay on life support at OSF St. Francis Medical Center in Peoria, Lesli Jett, 33, told investigators the boy had slipped and fallen. Jett was dating the boy’s father at the time of the incident.

Thurman was in full cardiac arrest when East Peoria paramedics arrived at 109 Jefferson Court just after 9 a.m. on Feb. 18, and East Peoria Police Chief Steve Roegge later said during a Feb. 27 press conference that Thurman had been severely beaten.

“Ten minutes after paramedics arrived, they asked police to respond and they were advised he was in critical condition and that he was covered in bruises from head to toe,” Roegge said. “Only Lesli Jette, Tate and a 2-year-old were present at the time. The 2-year-old was sleeping.”

Thurman was pronounced brain dead Feb. 20. Peoria County Coroner Jamie Harwood said at the press conference that he examined and photographed the child that night and that his injuries were “grossly inconsistent” with Jett’s claims.

“I went up to the hospital that night, shot over 100 photographs of the injuries,” Harwood said. “As a registered nurse and a trained investigator, it was consistent with abuse … the cause of death was blunt force injury.”

Thurman remained on life support until organ donations arrangements could be made. An autopsy Feb. 24 supported Harwood’s initial examination results. Two days later, police searched the Jefferson Court residence, then later arrested Jett at Thorton’s gas station in Creve Coeur, where she was the passenger in a car.

Jett is being held at the Tazewell County Justice Center on $3 million bond. She faces three first-degree murder charges and a fourth felony charge of aggravated battery to a child under the age of 13.

She will appear in felony court on a preliminary hearing March 19.  The charges could bring up to 100 years in prison on one murder charge, because the victim was under 13. The other murder charges carry a maximum 60-year sentence.

At the press conference, which was held the day of Thurman’s burial, Tazewell County State’s Attorney Stewart Umholz said the 2-year-old, along with another child, were placed in another home by social workers.

“We were able to petition the court and we were able to safely place those two other children and take them out of the home,” Uhmolz said, commending the fire, rescue and police departments for meticulous work performed in what has become a sensitive case for the community.

Umholz also said confidential juvenile records and other information were posted on social networking sites, but have since been removed. He cautioned that such actions can be illegal and are also harmful to the successful prosecution of a case.

“Our community is a victim any time a child is murdered,” Umholz said. “Today should be about healing and thoughts and prayers for the family and the community.”