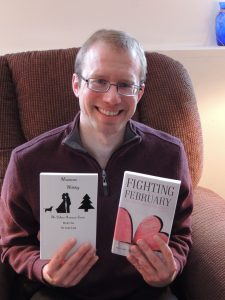 To say that Andy Lind loves a challenge is an understatement.

In just over two years, he has blogged several short stories and written two romance novels with plans for more. Lind, of Rockford, started his writing career by blogging under the title, “The Swell Owl — Short Stories to Entertain You;” however, his journey to becoming a published author started with a challenge.

“My mom and I were watching a Hallmark movie, it was one of those cheesy Hallmark films and I told my mom, ‘I could write a better romance story than this,’ and she said, ‘Well, why don’t you?’” Lind said.

He considered this conversation while on an extended walk with his dog Reagan and the outline for his first book, “Hometown Holiday” was born.

Lind self-published “Hometown Holiday” in March 2015 and said that while writing, he had some definite ideas on the book’s setting and characters.

Galena was also familiar to Lind who would often stop there as a halfway point between a job in Cedar Rapids, Iowa and his family in Rockford.

The plot of “Hometown Holiday” focuses on Joan, a single 40-year-old professional woman, who decides to spend her Christmas vacation at a Galena bed and breakfast run by the mysterious Senior Khan. Joan gets more than she bargained for after a chance meeting with Charlie, a Galena service-station attendant.

Besides a familiar setting for “Hometown Holiday,” Lind based some the book’s characters on people he knows.

“Joan is a strong, independent female character who has trouble falling in love because she is so focused on her career that she doesn’t have time for anything else,” he said. “The second character, the male love interest, Charlie, is loosely based on me. He is quiet, shy, divorced and works at a gas station. One of my friends said that Charlie is like a more handsome and more muscular version of me,” Lind joked. 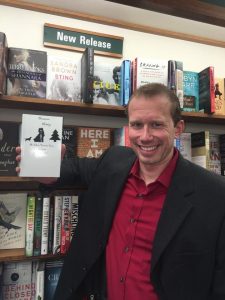 Andy Lind at the book signing for his novel ͞Hometown Holiday͟ at Book World in Galena. (Photo courtesy of Andy Lind)

For the character Senior Khan, Lind’s inspiration came partly from his father.

“I wanted a strong male mentor in the book to play the match-maker between Joan and Charlie. Senior Khan has a lot of wisdom and a lot of his characteristics are based on my dad,” he said. “The reason that Senior Khan’s character is Hispanic is because I liked the whole idea of machismo in the Spanish culture, it seems to embody masculinity.”

Lind adds that his dog, Reagan, plays himself in “Hometown Holiday”.

Publishing “Hometown Holiday” as a stand-alone novel was Lind’s primary plan for the book.

“I never intended for this to be a series. The original thought was for this to be a story on my blog; it was just supposed to be a one-and-done thing. After I passed the 20,000-word marker and still wasn’t done, I grew it into a full-blown novel,” he said. “The idea to make “Hometown Holiday” the first book in series came about because I left a few loose ends at the conclusion of the novel. There were some unresolved issues surrounding another character, Heather, and I decided to pick up on that and make her the main focus of the next book in the series,” Lind said.

“Fighting February,” the second book of Lind’s “Galena Romance Series” just came out on Jan. 7 and focuses on the romantic changes and challenges surrounding Heather and her twin sister Rebecca. Plans to promote the book include a meet-the-author book signing from 1-3 p.m. Saturday, Feb. 11 at Book World in Galena. Both “Hometown Holiday” and “Fighting February” are available on Amazon.com.

Lind is no stranger to changes and challenges in his personal life either. All through his grade-school and high-school years, he struggled with learning disabilities. After graduating from Boylan Catholic High School in 1999, he lived and worked briefly in Cedar Rapids before returning to the Rockford area and starting his writing blog. Diagnosed with adult ADHD in his mid-20s, Lind views writing as both a challenge to and release for his creative energy.

“It is possible to focus on something like writing, even with ADHD,” he said.

Lind shares some of his tips, “The first thing I do is get rid of distractions. Turn off the TV. Some authors say that music helps them write; not for me. I have to have dead silence. I usually just have one light on and my dogs are upstairs, this is the environment that help the ideas flow.”

In addition to eliminating distractions, Lind says that his writing and creativity happen best when he records his thoughts as they surface. 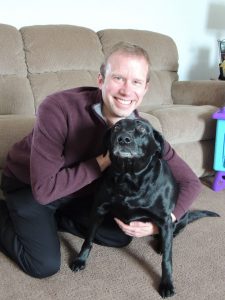 Andy Lind with his dog, Reagan, who is featured in his book, ͞Hometown Holiday.͟ (Photo by Lynne Conner/for Chronicle Media)

“For writers with ADHD, my advice would be, don’t let an idea get stuck in your head, “ he said. “Once you get the idea, write it down immediately … In order to keep my focus, I like to leave cliff-hangers at the end of a chapter. This helps to keep my motivation up and to keep going with the story. Is ADHD a struggle? Yes, of course it is, especially when it comes to writing. But the best advice I can give writers with ADHD is to never let the story go. Just think about all those writers out there who don’t have ADHD and haven’t finished their books.”

With Valentine’s Day right around the corner, Lind’s readers may be wondering what this handsome, single 30-something considers to be the perfect romantic evening.

“I would go and pick the girl up, meet her family and take her out for dinner at a wonderful restaurant and then go dancing afterward,” he said.

The part about dancing is not just talk for Lind who goes swing dancing on a regular basis and has participated in dance events in Iowa and Illinois.

“One of my dance instructors said that most guys learn swing dancing in order to meet girls, but then they find out that dancing is really fun and then they get more involved,” he said.

In a few months, Lind is set to compete in a “Jack & Jill” dance competition where he and a randomly chosen partner are paired to dance, hopefully avoiding elimination.

Whether walking his dog, Reagan, stepping out at a swing-dance event or traveling to Ireland, Lind draws his writing inspiration from many different sources and has set a lofty goal for 2017.

“My hope is to crank out five novels this year,” he said. “I did no real writing in 2016, but instead focused on short story blogs and self-publishing and promoting “Hometown Holiday” and “Fighting February.” In 2017, I really want to get back to writing.”