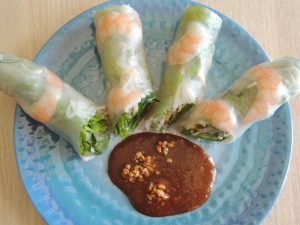 These Vietnamese shrimp spring rolls with peanut sauce are a fresh and tasty choice for an appetizer or a light stand-alone lunch. (Photo by Lynne Conner/for Chronicle Media)

Forget the hassle of packing, making hotel reservations, endless hours at the airport and a possible TSA pat down. This summer, take a trip with your taste buds and experience the bold and complex flavors of Asia and the Mediterranean.

Foods from these areas of the world are not just fresh and tasty; they are also some of the healthiest ethnic food picks around. Asian and Mediterranean foods turn eating ethnic into eating healthy.

According to Shirley Poole, a clinical dietitian at SwedishAmerican Hospital, the main staples of an Asian diet differ in quantity and type from a typical American diet.

“For the majority of people from that part of the world, rice is the staple of their diet. So they tend to eat two to three cups of rice at a meal … which is a lot more rice than what we here in the United States tend to eat. They do add in vegetables and meat, mainly pork and chicken. Beef is not often served and the amount of fish eaten usually depends on how close they live to the ocean,” she said.

Poole notes that the rice served in traditional Asian dishes is not processed like the rice sold in U.S. grocery stores. This unprocessed rice tends to have more nutrients and fiber than its processed white rice counterpart.

Another health benefit of Asian food over American fare is the focus on vegetables as a main part of each meal.

“Fresh food and lots of vegetables are almost always used in Asian cooking, that’s very valued in that culture. There are definitely more vegetables used in Asian dishes than in most American meals,” she said. 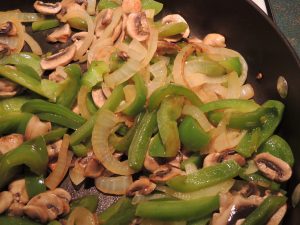 Many Asian dishes use fresh vegetables, which are quickly stir-fried to retain flavor and nutrition (Photo by Lynne Conner/for Chronicle Media)

Poole also notes that the vegetables in Asian cooking are usually stir fried or lightly steamed which helps to retain the vitamins and the overall nutrition of the food. She said that Asian food is typically made to order which is very beneficial to those watching their intake of sodium or fat.

The timing of meals and portion sizes also figure in to the advantages of Asian cooking.

“People in some Asian cultures tend to eat a larger breakfast, a lighter meal at noontime and then a heavier dinner,” Poole said. “For some Koreans, breakfast is rice and a protein. Then they add some clear soups, which are used for lunch and dinner. The soups are traditionally any type of vegetable, including the stalks and leaves. The soup is usually served as a beverage with the meal.” Attention to fresh ingredients, using the quick stir-fry cooking method and a focus on smaller portion sizes all make Asian foods a good choice for those wanting to eat healthy while enjoying a change in their usual diet.

The Mediterranean diet has also been hailed by healthcare institutions such as the Mayo Clinic as a healthy choice for those wanting to add some ethnic flair to their diet.

Wheat and rice are used as main sources of grains in Mediterranean cooking, however, the wheat is not processed into white flour as seen in many American diets.

“They will use things like bulgur, couscous, millet and buckwheat,” Poole said. “These grains are fast growing and much more likely to be eaten in the Mediterranean region than in the United States. Again, these grains are eaten as whole grains, which make them more nutritionally sound.” 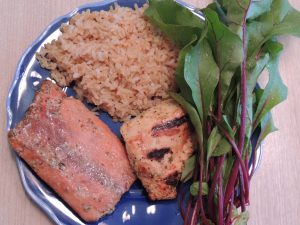 Some staples of the Mediterranean diet include fish, rice, chicken and leafy greens. (Photo by Lynne Conner/for Chronicle Media)

Beans and thickened or Greek yogurt serve as a main source of protein in the Mediterranean diet. Poole explains, “Typically breakfast would be a bread product, with coffee or tea and maybe some yogurt. There may also be a hearty dish of lentils or fava beans. Lunch is usually the main meal of the day, which may consists of a salad with some fish or poultry. They use a lot of vegetables, lentils, garbanzo beans. The meat and vegetables are cooked together. Dinner is usually a light meal and it might just be fruit or bread with cheese and maybe like a meat and vegetable kabob.”

Since the Rockford region boasts many ethnic food offerings from Vietnamese to Middle Eastern cuisine, a trip abroad isn’t necessary to sample some fresh and exotic fare from these regions of the world. The unique flavors of Asian and Mediterranean foods prove that eating healthy can include eating ethnic and giving your taste buds a vacation from the ordinary.