The Frank Lloyd Wright-designed Pettit Memorial Chapel at Belvidere Cemetery features the architect’s noted Prairie Style of design and use of both strong and subtle geographic elements. (Photos by Jack McCarthy / Chronicle Media)

The first impression of the architectural gem inside Belvidere Cemetery is how relatively small it is.

Famed architect Frank Lloyd Wright was more noted for sprawling homes among the more than 500 works he designed and were completed during his lifetime.

But the cemetery’s Pettit Memorial Chapel, built in 1906, is also every bit a Wright masterpiece.

The distinctive work is hardly diminished by its smaller footprint. It features the architect’s Prairie Style of design that employs strong horizontal lines and geometric ornamentation. 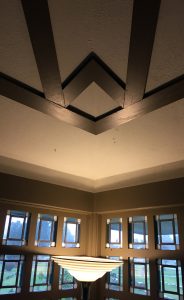 The Frank Lloyd Wright-designed Pettit Memorial Chapel at Belvidere Cemetery features the architect’s noted Prairie Style of design and use of both strong and subtle geographic elements, as seen in the chapel’s interior. (Photos by Jack McCarthy / Chronicle Media)

Visitors to the cream-colored building with forest green trim had a rare chance to view the interior as part of last Saturday’s theatrical performance of “The Ghost of Mamah Borthwick – Frank Lloyd Wright’s Great Love” inside the chapel’s main room.

Wright was commissioned to design Pettit Memorial Chapel by Emma Pettit to honor her late husband Dr. William Pettit, a Belvidere native and Iowa physician and humanitarian. The structure was built for $3,000 and is located near Pettit’s grave.

The chapel, said to be one of only two Wright designs intended for a cemetery setting, was placed on the National Register of Historic Places in 1978.

“The building expresses a solemn formality by its symmetry from many angles,” according to the National Register nomination prepared by Thomas A. Heinz, an Oak Park architect. “It embodies the very essence of his Prairie ideal: the hip roof with overhanging eaves, the abstract geometric art class windows, the elevation of the functional floor, and the plastic expression of the stucco exterior with wood trim.”

Wright, who also designed the Laurent House in nearby Rockford as well as numerous other homes and properties in Chicago and its suburbs, died in 1959 at age 91.

“The location in a cemetery is significant because it is unlikely to be torn down or the design in any way obscured, except perhaps by foliage,” the National Register nomination continued. “Its setting is ideal for expressing Wright’s ideas of architecture’s relation to nature.” 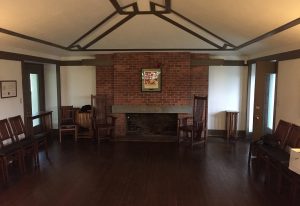 A fireplace is a focal point in the main room of the Frank Lloyd Wright-designed Pettit Memorial Chapel at Belvidere Cemetery. (Photo by Jack McCarthy / Chronicle Media)

Belvidere Cemetery opened in 1847 and reportedly contains 13,000 known graves. According to reports, the chapel underwent a $60,000 renovation in 1977 spearheaded by the Belvidere Junior Women’s Club.

Another round of repairs were made in 2003, including a new roof and porch floorboards, plus painting paid for by a state tourism grant and a trust fund.