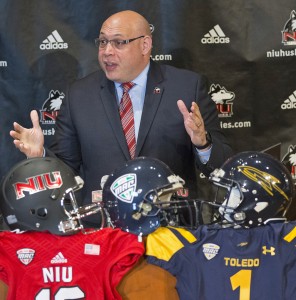 Northern Illinois University and the University of Toledo will play in the “Huskie Chi-Town Showdown,” the first football game in the 25-year history of U.S. Cellular Field, on Wednesday, November 9, 2016.

Annually one of the Mid-American Conference’s premiere contests, the contest between MAC West Division rivals will air nationally on an ESPN Network at a time to be determined.

Over the last several months, NIU worked with the Illinois Sports Facilities Authority (ISFA) and the Chicago White Sox to bring the game to U.S. Cellular Field.

“Our fans have said, come back to Chicago, come to the city,” Frazier said during an announcement last week at U.S. Cellular Field. “Well, we’ve listened and we’re back. There are 145,000 NIU alumni living and working in Chicagoland.  U.S. Cellular Field is a fantastic venue and I can’t wait for our fans to see this game in the ballpark.”

Tickets to the Huskie Chi-Town Showdown game between NIU and Toledo at U.S. Cellular Field are included in the six-game 2016 NIU football season ticket packages now available for purchase online at NIUHuskies.com, at the NIU Convocation Center Ticket Office in DeKalb or by calling 815-753-PACK (7225).

NIU students will be admitted free with their OneCard and can purchase student guest tickets for $22. NIU season ticket holders and Huskie Athletic Fund donors will have the first chance to request additional tickets to the game at U.S. Cellular Field beginning April 4.

Information about a pre-sale for White Sox season ticket holders, Sox Pride Club and Black List members will be announced at a later date.

NIU has played three games in Chicago over the past decade, with games at Soldier Field in 2007 (versus Iowa), 2011 (versus Wisconsin) and 2012 (versus Iowa).

The contest with Toledo will mark the first Mid-American Conference match-up in the city and features the two winningest programs in the league this century.

The game has become one of the marquee games on ESPN’s weeknight #MACtion line-up each November as ESPN has nationally broadcast each of the last six games of the all-time series, which dates back to 1967.

NIU is coming off an 8-6 season in 2015 that saw the Huskies win their sixth consecutive MAC West Championship and play in a bowl game for a MAC-record eighth consecutive year.