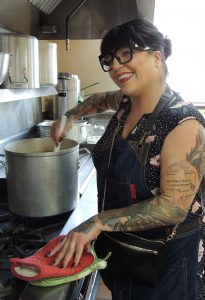 Carly Rice stirs a pot of glaze for cooking pork loins at her outreach center. (Photo by Lynne Conner / For Chronicle Media)

A 3 a.m. knock on the door rouses Carly Rice out of bed.  She answers with a sack lunch in hand, compassion in her heart, determination and a steel will to help whomever she meets on the other side.

Rice well understands the hungry, suffering and marginalized as they reflect her own journey from Skid Row in Los Angeles to Angel of Rockford’s 5th Avenue.

“We’re not an institution, we’re a family,” Rice said of Miss Carly’s Community Outreach, 1125 5th Ave. on Rockford’s near southeast side.  The building, a former Buddhist Temple, now serves as Rice’s home, photography studio and more recently, a place of “empowering those in need, one meal at a time.”

“We started this outreach because I saw human trafficking and sexually-exploited women on the streets (around my home) and I connected with them as an ex-prostitute myself,” Rice said.

“We distribute the sack lunches and ‘go bags’, filled with hygiene products, shelf stable snacks and a list of local social service agencies  — 24/7, no questions asked, — because the women can’t come during daylight hours,” she said.  “If they’re trafficked, they’re not allowed to go to places that can help them like the police. It’s too dangerous for them.  They can come here late at night, knock on the door and (quickly) get a sack lunch and go bag.

“I want these women to eat.  I want them to know there is someone who cares about them, so that when they are ready to get out of their situation, there is a safe place to go,” Rice said.  “We are just one of multiple local agencies that are trying to reach the people society doesn’t always see.”

Rice’s compassion for street people, sexually-trafficked women and drug addicts comes from having been in those situations herself.

She grew up homeless in the Skid Row area of downtown L.A., was a drug addict at the age of 13 and began working as a prostitute by her mid-teens.  After her mother was kidnapped and eventually murdered in a public restroom, Rice spiraled further into prostitution and drug use.   As a young woman, she was raped and witnessed the murder of the man who had raped her. 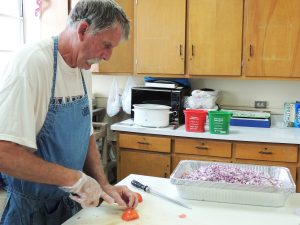 “At this point, I was facing life in prison because I refused to testify against the man who murdered the rapist,” she said.  “My best plans were to spend the rest of my life in prison because fixing my life seemed like a really hard thing to do.  It seemed much easier to go to prison, know where my food was coming from, sell drugs for a gang in prison and have a prison wife … Fixing my life seemed impossible.”

Rice spent a year in solitary confinement before the intervention of California attorney Katie Albright, daughter of former U.S. Secretary of State, Madeline Albright.  Katie had successfully prosecuted the man who murdered Rice’s mother and had gotten to know her in the process.

“Katie came to me in that solitary confinement cell and said, ‘What the hell are you doing?  Why are you throwing your life away?’  She made me rethink things … I finally got on the stand and testified for the state, was released from prison and Katie negotiated my move to Rockford.  I just wanted to live a normal life once I relocated.”

After an injury, Rice was prescribed Vicodin for pain and once again became addicted to drugs.

“I went headlong in to using drugs again.  I thought I was going to get my life together again and I didn’t,” she said.  “Both of my kids were born with large amounts of Vicodin in their systems and I greatly regret that.  This was a deplorable and disgusting situation for me, because it perpetuated the mistakes that I had made in my life.”

After detoxing from drugs at a local motel, Rice also spent some time in a drug treatment facility.

“Initially, I couldn’t get in to any drug treatment programs because of the six-to-eight week waiting period,” she said.  “When you are neglecting your children and loathe yourself there is no time to wait for treatment.  Every day is a battle.  I almost committed suicide and I don’t want others to have to go through what I did.”

Rice’s idea for Miss Carly’s Community Outreach was born out of love of cooking and wanting to help the less fortunate in her neighborhood.

“You can redeem yourself from a life of drugs and crime and use your past as an asset,” she said.  The sack lunches and go bags are only a part of what Rice and her volunteers provide others. 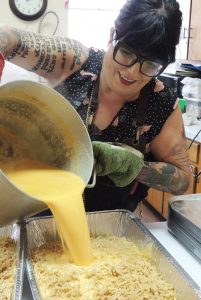 Carly Rice pours cheese sauce over the macaroni and cheese casseroles which will be served at dinner. (Photo by Lynne Conner / For Chronicle Media)

Each week on Monday, Wednesday and Friday, Rice and her crew cook and serve a 3 p.m. dinner for whomever comes to her 5th  Ave. studio.  The meals are prepared in commercial kitchen space donated by the Ellida Lodge Home Association, a next door neighbor to the outreach.

“The meals are designed to be healthy and filling and we serve big man-sized portions at our dinner times.  The plates are overflowing with food and there is not much waste,” she said.  “Street people travel everywhere on foot, so they need the calories; they need nutrient-dense food.  We work really hard to make the meals big and heathy.”

A typical meal at Miss Carly’s could be roast pork loin with bacon and maple barbecue sauce, baked macaroni and cheese and a tossed green salad.  Rice estimates that around 200 people are fed at each dinner service.

Rice also has a donation room that dinner clients can visit if they need clothing, shoes or personal hygiene items.  The donation room is largely run and staffed by street people.

“We’re really big on peer accountability, so that everyone who works at Miss Carly’s feels like part of a family,” she said.  “I’d rather have one of our clients helping out in the donation room than out of the street being tempted by drugs.”

Rice’s determination and steel-will recently won her a victory at Rockford’s City Hall.

“We had to go through the zoning board, get the building rezoned; then dealt with codes and regulations, got that handled and then we had to go to the full Rockford City Council,” she said.  “It was absolutely a miracle that we got through that process and were granted a special use permit to continue running our community outreach.” 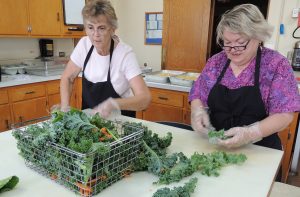 “I just couldn’t believe that we had the unanimous vote of the city council to continue our work,” Rice said.  “I think what eventually got all the council members on board was that some of them came down to Miss Carly’s and witnessed what we do here.”

“The blessings we have seen through our work are endless, just endless; they’re beyond uncanny or coincidental, it’s downright amazing and miraculous,” Rice said.  “Every single time there’s anxiety about how to solve a problem; something happens and the issue is resolved.”

“We needed more commercial refrigerators and a $3,000 donation came in so we were able to buy the fridges,” she said.  “It’s always panic, like being on the verge of ruin but then exactly what we need comes through, right when we need it.”

The greatest satisfaction Rice receives, however, comes from the people she helps.  “Seeing someone grateful for a sack lunch or a darn pair of shoes; seeing someone excited about a job interview; those are the blessings and victories most important to me.”