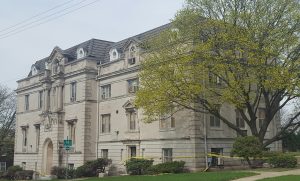 The former Rockford Diocese Chancery building is among several properties that preservationists want to save while the diocese seeks demolition. (Landmarks Illinois photo)

A statewide preservation group last week called for several Rockford Roman Catholic diocesan buildings to be saved from demolition and placed the structures on an annual list of Illinois’ most endangered properties.

Bishop David Malloy, meanwhile, continued to oppose any landmark designation for a former Chancery (administrative) headquarters and adjacent buildings and called on parishioners in the 11-county diocese to back him up.

Landmarks Illinois included the Rockford Diocese’s Chancery and Piety Hill properties among its 2019 list of 12 architecturally significant endangered properties around the state announced on May 1. The private preservation group joined other local activists in efforts to save and repurpose the structures.

The Rockford City Council was scheduled to vote May 6 on landmark status for the onetime office and bishop’s residence, a school and convent.

While the scheduled council vote marked a milestone, the process may not be over should either party opt to file lawsuits. So far, neither side has suggested legal action is in the offing.

Landmark status was sought for the unused diocesan buildings and the still-active — for now — Cathedral of St. Peter School. Future plans call for replacing the structures with open space and parking.

The diocese seeks to demolish the Chancery and convent, but has announced no public plan for the school, which closes this year.

Landmarks Illinois called for the diocese to sell the buildings for reuse, rather than tear them down.

“The Chancery Office and Bishop Residence is an excellent example of Beaux Arts architecture and stands grandly at the crest of a natural rise within Rockford’s Signal Hill neighborhood,” Landmarks Illinois said in a statement. “The chancery, with its columns, articulated corner quoins, balustrade and mansard roof with circular dormers, among other ornamentation, was described by the Rockford Register Star as “a beautiful building that looks as if it were airlifted from Europe.”

Former Rockford Mayor Larry Morrissey told Northern Public Radio that the properties could qualify for tax breaks and be converted into housing.

But the diocese said the properties do not meet landmark standards.

“The Diocese of Rockford, as well as Rockford architect, Dan Roszkowski, maintain the buildings do not qualify for landmark status because none of the buildings meet the primary criteria for historic designation, which states that a “structure or site must retain the integrity and spirit of the original design,” according to a statement in The Observer, a diocesan newsletter.

The Rockford City Council’s Codes and Regulations Committee voted unanimously last month against an application for landmark status. The full City Council then deferred final action until the May 6 meeting.

In his April 29 letter, Malloy said repairs would be too costly and that demolition and creation of outdoor space for prayer and other uses would be more efficient use of the property.

One estimate put repair costs as high as $5 million.

“Those who oppose our plan to raze these unused, decaying and costly buildings have suggested they be allowed to develop them for commercial or public residential use,” Malloy wrote. “This of course would require the diocese and the Cathedral parish to sell or lease the campus land not to mention the buildings. The breaking up of the cathedral campus would not fulfill the mission of the Church which rightfully and lawfully has owned the property since the turn of the 20th century … long before the petitioners were even born.”

Most of the property has been unused for nearly a decade. But Landmarks Illinois said the exterior remained in “near pristine condition” until late in 2018 when the diocese began removing fixtures, doors and windows and placing them up for sale until a stop work order halted initial demolition.