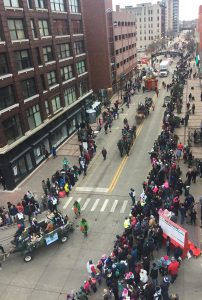 An aerial view of part of the Stroll on State parade route on Nov. 24. (Photo by Jack McCarthy / for Chronicle Media).

Officials with Rockford Area Convention & Visitors Bureau said the numbers were up 6 percent from 2017.

“We’re grateful the event continues to bolster revitalization efforts and provides a boost to business owners during the holiday season,” said  John Groh, RACVB president/CEO. “Stroll is a community-supported event and happens thanks to the generosity of so many local partners, sponsors, volunteers, and business owners.”

They said key elements contributing to success were a Dasher Dash 5K run/walk, an expanded holiday parade and the enhanced Frosty’s Merry Markets that included new retail and food vendors.

“I had a 20 percent increase in gross sales over last year’s Stroll,” said Karen Elyea, owner of Minglewood. “This is so important for me because aside from that one day of sales, I have been down a bit. It took me six weeks prior to Stroll to ring up the amount that I rang during that one night,” “This event really helps our bottom line and sets the pace for continued sales growth this holiday season.”

In a post-event survey, Stroll on State and downtown Rockford collectively received favorable feedback. It was reported that 95 percent of people said they had a positive (excellent/50 percent very good/30 percent or good/15 percent) experience at the event.

Other data from the RACVB survey reported: