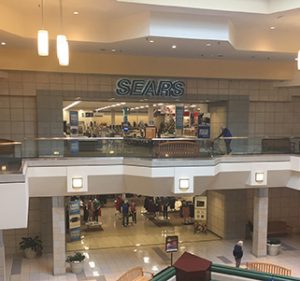 Sears Holdings has identified the Sears store at Cherry Valley Mall as one of 11 in Illinois it seeks to keep open as it seeks a new buyer to continue operating a scaled down company. (Photo by Jack McCarthy / Chronicle Media)

Sears Holdings has identified a local Sears store as one of 11 in Illinois it seeks to keep open as it seeks a new buyer to continue operating a scaled down company.

The company identified the stories in a Bankruptcy Court filing last week, according to published reports.

The Sears store is located at Cherry Vale Mall. Other Sears stores that could remain open including downstate outlets in Fairview Heights and Peoria, plus Chicago suburban  stores in Bloomingdale, Chicago Ridge, North Riverside, Oak Brook, Schaumburg and West Dundee plus Kmarts in suburban Bridgeview and Des Plaines.

Sears Holdings filed for Chapter 11 bankruptcy protection last month and offered a plan to sell its best-performing stores and keep them open. Separately, the company is in the process of liquidating a Sears in Joliet and Kmarts in Moline, Quincy and Norridge.

Notable items included in the new budget include:

This consolidation into the general fund makes the budget seem disproportionately larger than the previous year, due to the restructuring of funds.

Rockford University senior Tracy Wang (Jiangsu, China) has been named as a 2018 Lincoln Laureate by The Lincoln Academy of Illinois.

Each year, the annual Lincoln Academy Student Laureate Ceremony recognizes excellence in curricular and extracurricular activities by seniors from each of the state’s four-year, degree-granting colleges and universities, and one student from the community colleges in Illinois. This year’s ceremony took place on Nov. 17 in Springfield. President Eric Fulcomer, Ph.D. accompanied Wang for the ceremony.

Tracy attended Pine City High School in Pine City, Minn., and will graduate from Rockford University in 2019 with a major in Political Science and a minor in Math. After completing her degree, she plans to attend law school to achieve her professional goals.

As an active student leader, she has been a member of the Rockford University Facility Committee, the Multicultural Club, and the Student Athletic Advisory Committee. She is also currently serving as the student representative to the University’s Board of Trustees.

Northern Illinois University has entered into an agreement to have Northwestern Medicine assume management of the university’s Health Services. The NIU Board of Trustees voted to support the agreement in a special meeting Nov. 15.

“We are excited to enter into a partnership with one the most respected health care systems in the nation,” said Wheeler Coleman, chair of the NIU Board of Trustees. “Northwestern has the expertise to not only provide excellent care for our students, but also to successfully navigate the constantly changing health care landscape.”

Starting Jan. 15, 2019, Northwestern Medicine will manage NIU’s campus clinic to provide high-quality outpatient health care similar to that at an urgent care facility or primary care physician’s office. The clinic will be staffed by medical professionals with years of experience providing the services currently offered by Health Services, all of which will still be offered. Northwestern Medicine also will provide an expanded menu of clinical services and more flexible hours. Walk-in service also will be available, a departure from the appointment-only model currently in place.

The final votes are being tabulated, and when they are, a major project to mark Illinois’ bicentennial will be complete.

The Illinois Top 200 list, voted by the public, include 20 categories, such as the best scenic locations in the state, top political leaders, favorite movies shot in Illinois and leading musicians. Votes are being tabulated for the final category: Unforgettable Moments. Choices include a diverse set of news events such as the Lincoln-Douglas debates, the Chicago “Black Sox” scandal and the removal of former Gov. Rod Blagojevich from office.

When the list is complete, the results will be available on the Lincoln Presidential Library’s website, and will be a resource for anybody who is interested in exploring the state’s history.

The full Top 200 list will be ready in time to be part of the celebration of Illinois’ 200th anniversary on Dec. 3.