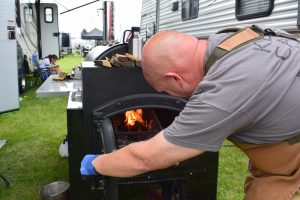 Kent Schuetz (above) prepares his pork ribs during the professional competition on Day 1.

The aroma of barbecue filled the air again at the 11th annual Central Illinois Barbeque Throwdown July 16-18 in Eureka.

Hosted through the Kansas City Barbeque Society, the event consisted of numerous competitions and opportunities for the barbecue community to perfect their cooking.

“Judges and teams always enjoy coming here,” KCBS representative Peg Rogers said. “From a representative perspective, it’s always a little crazy. We’re trying to pull everything together, but because they had such a good volunteer team, it makes it a lot easier. Overall, it was a very good event for both the professional teams and the backyard teams.”

Rogers and her husband, Dave Rogers, oversaw the entire competition and held all judges and participants to KCBS competition standards.

“There’s a lot of really good professional teams here. When you listen to the results and who won, it was a big mix,” Peg Rogers said. 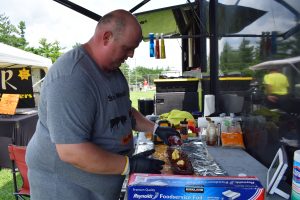 Brian Calhoun prepares his pork ribs during the professional competition on Day 1.

During the barbecue competition, some commented on the potential subjectivity of the judges.

“Everybody has their own different taste. I’m from the South. We tend to like more heat in our foods, and up here it seems to be more sweet,” judge Ronda Sutton said. “So, just being able to give the feedback to the teams as to what we like and what we don’t like helps them with their results.”

Others feel that while objectivity is difficult to maintain, competitors can gain a lot from competitions and trust judges’ comments.

“They tell you in class that taste is subjective. Not everybody has the same palate. So, you just hope that they [judges] are trained enough and professional enough to do what they need to do and be right about it,” said Tim Matthews, competitor from Up From The Pits BBQ.

After a year that saw several national competitions cancelled due to the COVID-19 pandemic, Peg Rogers said it was great to have a more “normal” competition this weekend. She is hopeful that more teams will enter to compete next year as the nation transfers to post-pandemic life. 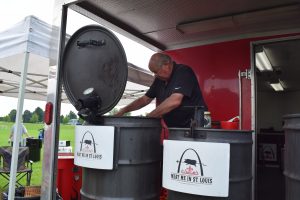 During the afternoon hours, nine teams competed in the backyard competition and cooked chicken and ribs for community members’ judgment.

Many teams often travel long distances and are used to the high demands of competing in barbecue competitions across the nation.

“It was a great experience. We got here at about 4:15 a.m. and we fired up our pit,” competitor Steve Iannarone from SI2 barbecue said. “We got out big meats — our pork and our brisket — on at 5 a.m. Cooking went just as planned. It’s a beautiful location, and the weather’s been perfect.”

In addition to the teams that competed, judges came from all across the nation. One judge, Eric Cantrell, traveled from Nashville for the competition.

“I’ve been doing this for a while, and I do several contests. Regardless of where I go for a contest, good barbecue is good barbecue,” Cantrell said. “You got a lot of good teams here. Even for a small field of 25. We had some good food, and it’s kind of what you expect with a field like this.” 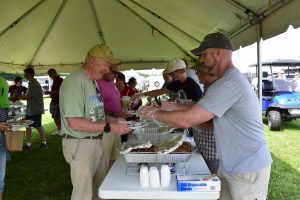 Each of the 25 teams in the professional contest was required to cook four entrees: chicken, pork ribs, pork and brisket.

After a long day of competing, the overall winner of the Day One professional competition was Triple H Barbeque, led by Bill and Andrea Heyen.

“It feels good [to win],” Bill Heyen said. “Everything went smooth, and we didn’t have any major issues.” 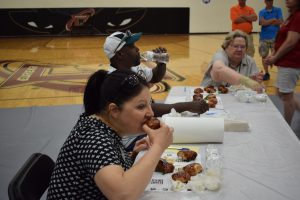 The judging of the professional competition began at noon for the 11th annual Central Illinois Barbecue throwdown. Here, judges tasted barbecue chicken in the first round of the competition and abided by all Kansas City Barbecue Society standards in their rating of entrees.

“First and foremost, it’s a family event. A lot of teams are out here with their families or just to come out and have fun in the camaraderie of it,” Sutton said after the competition.

Sutton went on to say that those who are looking to make a name in the barbecue world can improve from this competition by getting the opinions of others and incorporating the judges’ comments into their recipes for future competitions, providing them with learning opportunities and the ability to make connections.

Competitors from various teams said that their overall experience was positive because of the environment created by the barbecue community.

“Because of the weather, it’s actually been pretty good,” Matthews said. “Weather can play a huge factor when you smoke meats and do competitions, so the weather being as nice as it is, things went rather smoothly.” 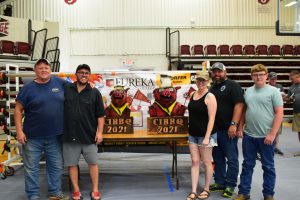 Bill and Andrea Heyen from Triple H Barbecue stand with their earned trophies after the awards ceremony. The Heyens won the overall competition and the pork ribs competition, and they have spent most of their weekends during 2021 at barbecue competitions in attempt to perfect their skills and learn from the judges’ comments to continue improving their cooking.

In addition to competitors, the community was able to enjoy barbecue from the professional and backyard teams and witness the competition atmosphere.