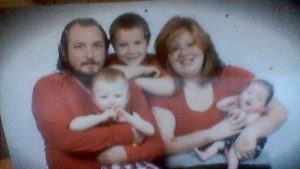 A fierce mobile home fire April 6 took the lives of Jason Wall, left, and his two young children, Damien and Ariel, as well as Kathryn Murray, who is not pictured. His fiancée, Katrina Alwood, and her son, Kyle, center, survived. (Photo courtesy of Katrina Alwood)

Katrina Alwood, 27, and her son Kyle, 9, survived and were transported to OSF St. Francis Medical Center in Peoria, where they were treated and released. Murray was Allwood’s mother, Jason, her fiancee. Daemeon and Ariel were her son and daughter, and Rose was a niece.

On April 18, a juvenile suspect was questioned about the fire, which was deemed intentional following an investigation by state and county police and the Office of the Fire Marshall.

“We’re making a charging decision. There is only one suspect. As long as forensics back up what we believe, there will be a charge,” Woodford County State’s Attorney Greg Minger said in April.

Along with five, first-degree murder charges, the juvenile has also been charged with two counts of arson and one count of aggravated arson. Under Illinois law, a suspect under the age of 10 cannot be detained.

A minor also is not given a public jury trial and is not entitled to one unless the minor is charged as an adult.

Therefore, no arrest warrant will be issued to the suspect, Minger said. The juvenile will be appointed an attorney and appear before a judge in a bench trial.

It’s likely, Minger said, that, if the youth is convicted, the outcome will likely be therapy and counseling, along with probation for at least five years, but not beyond the age of 21.

“It’s a tragedy, it’s charging a very young person with a the most serious crimes,” Minger said. “I think it needs to be done, at this point, for finality.”