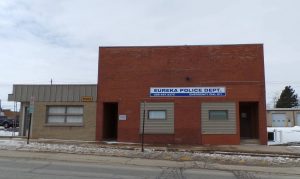 During World War II, building supplies were in short supply across the country. Whoever owned the small building at that time at 210 N. Main St. had rebuilt the flat roof using plasterboard instead of plywood.

That building now houses the Eureka Police Department and there are several other major problems plaguing the station, including a crumbling roof, and the neighboring Eureka City Hall building as well.

“My main issue is, I just want a building that’s accessible for people,” Eureka Police Chief Alex Collinge said. “If somebody has a disability I don’t want that to keep them from coming in. You want your government buildings to be accessible to everyone.”

On April 15, the city council approved its annual budget, which includes building allowances of $625,000 each for administration and police. The $1.2 million is already in the city’s savings account, Mayor Scott Zimmer said.

“The city has done a great job of staying on top of the budget and being cautious on spending, and we’re at a point now, when it comes to our facilities, to invest some of it,” he said. “The money is in savings, we’re not borrowing money, and we did not adjust real estate taxes for the money.”

Before deciding to “buy new”, engineers from Allied Design Architectural & Engineering Group, P.C. of Morton first inspected each building to see what it would cost to extend their usability while meeting the Americans with Disabilities Act standards. The cost of structural, plumbing, HVAC repairs and renovations, and ADA modifications came to $1.8 million.

“After we looked at those estimates, we decided then to do a needs assessment,” Zimmer said, “so we had the engineering firm look at city hall, the police department and the city size and put together a needs assessment.”

Combining the police department with city hall in a new building rang in at $600,000 less than restoring both buildings, and Zimmer said the city may not need to spend the total budgeted amount of $1.2 million. 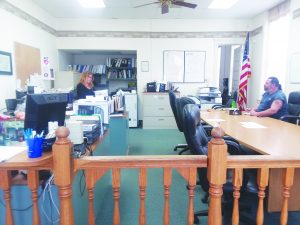 When the Eureka City Council meets at city hall, guests often stand elbow-to-elbow in the cramped meeting room. On April 15, the council approved its annual budget, which includes $1.2 million for a combined services building that will house city hall and the city’s police station. (Photo by Holly Eaton/for Chronicle Media)

Groundbreaking, he said, could begin as early as this summer on the property where the police department now stands. The city’s maintenance and salt sheds that once stood behind it were recently demolished.

The contents of the maintenance shed were relocated to property on Mill Street that the city purchased last year. Conveniently, the lot featured a shed that served as a replacement for the maintenance equipment.

“We had budgeted a new maintenance shed, then this opportunity came up and it worked out perfectly,” Zimmer said. “We have our maintenance equipment there, Christmas decorations, the salt shed is there.”

Once the city rules on final plans and architectural renderings, the old police station will be demolished. The city hall building will be sold and it is likely Woodford County will have the option to purchase it first, before it would go to market.

“I think the greater benefit will actually be for city hall, they that small space with nowhere for people to sit, but both sides will benefit,” Collinge said. “Any city-owned building is infrastructure, and why sink more money into repair, when a more efficient, ADA-compliant building can be built for less?”

Along with lack of handicapped accessibility, other problems have arisen from the various woes that vex the buildings. The cramped spaces often cause people in attendance at city council meetings to stand elbow-to-elbow in the cramped room.

Recently, a group of people came from out of town to the police station for interviews. A problem with the outdated HVAC equipment tripped the carbon monoxide detector alarm and the building was evacuated.

“This winter, we had to pull people in to interview them and the Co2 detector went off,” Collinge said. “We had all these people drive down in the cold weather, and we had to evacuate them.”

It’s not the first time Eureka has had to face the past to make way for the future. When the new Woodford County Correctional Facility was built around 20 years ago, the county jail consisted of a century-old house where the warden and his wife once lived among inmates.