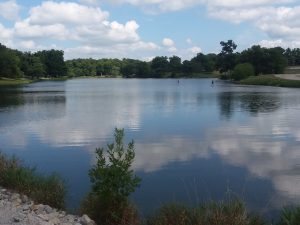 On Aug. 15, the draining of Eureka Lake will begin in order to eliminate the overpopulation of the aggressive European carp, an aggressive species that has overrun the lake and driven down the population of game fish, such as largemouth bass and catfish. (Photo by Holly Eitenmiller / for Chronicle Media)

First off, there are no Asian carp in Eureka Lake. Secondly, Asian Carp are actually a group of aggressive carp which are different from those that are wreaking havoc on the popular fishing hole.

“It’s a common European carp that have been around much longer,” Illinois Department of Natural Resources fisheries biologist Rob Hilsabeck explained. “In a lot of lake situations it’s the common carp that causes all the damage.”

Hilsabeck is managing the pending Eureka Lake draw down, a lowering of the lake which will beginning Wednesday, Aug. 15, an event which has raised many questions among residents.

Lake Eureka has been lowered before — in 2013 when the dam required structural reparations — but this will be the first time the city has drawn the lake to the lowest level possible.

“Lake Eureka used to be a water supply reservoir, and it does have the plumbing. It’s basically a drain valve, located pretty close to the bottom of the lake, near the dam,” he said. “We don’t know exactly how low the water will drain.”

After the 2013 drain, a harsh winter followed, resulting in the loss of 95 percent of the sport fish population;  largemouth bass, bluegill, sunfish and catfish. In the meantime, the carp thrived and reproduced exponentially.

Carp are bottom-feeding fish, Hilsabeck said, that work like blenders to stir up lake bed, making it difficult for other species of fish to reproduce or find enough oxygen to survive.

“Carp are great at reproducing, so, the game fish population was reduced, then the carp continued to reproduce and overpopulate,” Hilsabeck said. “They damage with their feeding habits. They root around the bottom and destroy aquatic plants, and they stir it up so the biological fish can’t see to eat the plants.”

Once the lake is drained, staff from the IDNR will apply rotenone, a compound that kills off fish within a few days. Some of the larger fish, Hilsabeck said, will be buried along the shore line.

But, most of them will be left to decay where they gather, which will likely be where the water will drain near the dam. It probably won’t smell very good, he warned.

“We’ll get out there and bury some of them, it won’t be a pleasant job,” Hilsabeck groaned. “Hopefully, the worst will only be for a day or two. Hopefully, for some of the residents around the lake there won’t be a lot of wind.”

The drain will be slow, he said, not like a bathtub in which the water quickly lowers. It should take a week or two for the lake to fully drain. Other wildlife, frogs, turtles and such, he said, aren’t bothered by rotenone. It only kills off animals with gills, though this does mean that the lake will lose all of its fish.

The carp infestation at Lake Eureka is that of the common European carp, not that of the Asian carp family. After the lake was lowered in 2013 to repair its dam, a harsh winter followed, and with it, the death of most of the game fish population and the overpopulation of common carp. (Photo courtesy of IDNR)

In the spring of 2019, IDNR will repopulate the lake with largemouth bass, blue gill, channel catfish and black crappie from its Manito hatchery.

In the meantime, he cautions residents against introducing any species of fish to Lake Eureka. “Please don’t do us any favors. We like to start out with fish of the same size, and introducing other fish interferes with their growth rate. The first two years are very important,” Hilsabeck said.

IDNR bases the number of fish it introduces on the fertility of the lake. In the case of Lake Eureka, it’s “carrying capacity” — the number of pounds per surface acre— is enough to qualify the lake for around 15,000 pounds of fish from the Manito hatchery.

On a positive note, the decomposed fish will provide vital nutrients for the lake bed. The lake will also become a little deeper as the sediment first dries, then settles after the aggressive, bottom-feeding carp have vacated the premises.

And minnows, Hilsabeck said, are not carp, although they used to be, which is why many people think that fishing with minnows will introduce carp into the environment.

Long ago, local bait shops would forage for small fish in local streams and ponds, and their catch was rarely an actually minnow, he said. The tiny fish they sold were often of a different species than minnow, and were frequently carp.

“The minnow myth is more of a holdover from when these places got their minnows from small streams that flowed into the Illinois River, and it was really just a hodgepodge of small fish. If you got a bucket of minnows, who knows what was in it,” Hilsabeck laughed. “That’s not permitted now, so, when you buy minnows, it’s one of two species raised commercially in ponds; fathead or golden shiner species.”

Eureka Lake should fill again nicely over fall and winter, he said, and in the meantime he asks residents and recreational users of the lake to be patient. “It’s all based on watershed, and the land that feeds into the lake has a pretty good watershed size. It’ll fill right up in fall and spring,” Hilsabeck said.