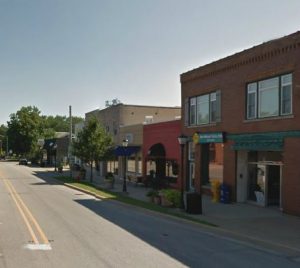 Eureka Mayor Scott Zimmer said money garnered from a business district tax will be used to provide additional parking on Main Street where customer parking is quite challenging. (Photo by Google images)

The proposal of a taxing business district has Eureka business owners at loggerheads with city officials as they work to improve a plan that began with a rocky start.

On Jan. 9 at The Cannery on Major Street, Eureka Mayor Scott Zimmer introduced a Business District Plan, which would include all of the city’s businesses, and also involves Development and Redevelopment Sales Tax.

Zimmer struck a tax nerve, and the kneejerk reaction was less than favorable.

“We had a meeting on the business district where we invited local business owners to attend,” he said. “There was support, but there were also a lot of concerns. Concerns about what an additional tax would do to their businesses and how and where the funds would be used.”

Sidewalks, maintenance, lighting, walkways and parking are among the improvements the tax dollars will fund, tax dollars which, by state statute, must be spent exclusively on the business district.

Business district taxes range from .25 percent to 1 percent, and are collected by the Illinois Department of Revenue for a 2 percent administrative fee, then disbursed before the 25th day of each month.

The law requires the municipality must hold two meetings at least one week before designation — though it is recommended that residents and businesses are provided an information plan —and that the municipality gains support from the business community.

And that’s what Zimmer plans to do.

“In the original plans we were hoping to implement a business district by a board vote in March, and it would go into effect in July,” he said. “I thought there were enough concerns that we’re pushing it back to January 2019.”

The city council must vote Oct. 1 in order to put the plan in place by the beginning of the year. “We’re going to set up three more opportunities to meet with all the business owners,” he explained, “lay out things I would like to see happen, find out what the business owners feel we need and what we can do to better our economy.”

“We need more of a plan before we can say whether we’re in support of it or not,” Schreyer said. “They need a better plan, more facts. When asked specifically what their plans would be, they really didn’t have their ducks in a row.” 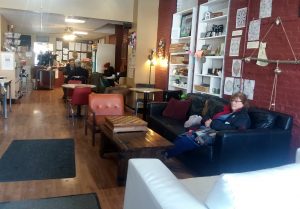 Mika’s Bristro owners Dave and Regina Park are proponents of the concept of a business district, but are unsure about imposing additional tax. The Parks would like the community, as well as the business owners and city officials, to brainstorm together to “make Eureka a shopping and dining destination”.  (Photo by Holly Eitenmiller/for Chronicle Media)

Among the more troubling concerns were the pending tax increases proposed by the Woodford County Schools, and the possibility of continuing the public safety tax to fund the county jail operations.

On the March ballot, county residents will have the opportunity to decide whether or not to increase the schools’ property tax levy by 2 percent. In November, voters will be faced with the decision to keep the 1 percent public safety tax, though that percentage may be reduced by then.

“They said at the meeting that they’re going for 1 percent,” Schreyer said. “I don’t know, with the school taxes coming up, any increase might be out of the question.”

Schreyer, as well as Mika’s Bistro owners Dave Regina Park, are in favor of the concept of a business district and collaborative benefits it may have, but none are fans of imposing a tax on consumers.

“Mika’s definitely would love for the business district to be developed,” Regina Park said. “Not sure if the tax is the best idea. We need a community brainstorm to develop this idea as a community and see how we can make Eureka a shopping and eating destination.”

A 1 percent or lower tax increase may not seem like much in most instances, but Schreyer said she’s worried for the retailers who sell more expensive goods, such as jewelry and cabinetry.

Not all products are taxed, however.  By state statute, gasoline, unprepared food, prescription and nonprescription medicines and medical appliances, prepaid phone cards, and anything requiring a title or registration are among the nontaxables.

In the coming months, Zimmer said he hopes to iron out the wrinkles in the plan and devise a means of spurring Eureka’s economy through public input.

The next meeting on the Development and Redevelopment Sales Tax will likely occur in April, with a final meeting tentatively scheduled for June 1. Information on the February forum, along with other city matters, may be found at www.eurekaillinois.net.