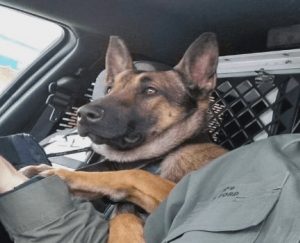 Neither Oz the drug-sniffing dog, or K-9 unit officer Sgt. Tim Ford, will be retired from the Metamora Police Department to save money.

The rumor arose during an Oct. 16 village board meeting, as board members reviewed itemized budgets from various departments, looking for ways to cut costs.

At the beginning of 2019, the Woodford County Sheriff’s Department will begin using the Starcom 21, the same radio system the Illinois State Police use. The Metamora Police Department still uses the UHF and VHF radio frequencies.

“It’s a completely new radio system and there are other departments in Woodford that will have to redo their radios in order to communicate with the county,” police chief Mike Todd said. “It’s going to be a pretty big expense for small towns like ours.”

Soon, the Federal Communications Commission (FCC) will announce the deadlines for the changeover, but the village is preparing now for the inevitable bill.

That’s why Mayor Ken Maurer brought up the K-9 Unit during the meeting, and suggested the board take a close look costs to determine if the program should be continued after Oz, the village’s police dog, may no longer serve.

“I wanted to evaluate the whole program and see how we’re doing,” Maurer said. “Our dog has about 3 to 5 years until he ages, and we may not continue with a K9 unit after that.”

No one, he said, suggested they “retire” Oz, or his partner, Sgt. Tim Ford, who ranks just under Chief Todd in seniority.

Nevertheless, it was assumed the village planned to get rid of both of them, and the rumor quickly went viral. After the meeting, a resident launched the Facebook page, “Keep Oz & Officer Ford”.

On Oct. 22, HOI ABC news anchor, Kyle Beachy, reported, on-air, that the village was “in danger of losing Oz to budget constraints”, and also mentioned the Facebook page. Beachy did confirm that the village is not seeking to be rid of Sgt. Ford.

Todd said the matter was addressed and clarified at the village’s Nov. 6 meeting. Though no media were present, the people responsible for the Facebook page were. The matter, however, still persists, and many still believe Oz’s career is over.

The Facebook page has not been taken down and 218 people are following the page, and 212 people like the page.

“Surely the police department can find others (sp) ways to cut expenses without cutting our only K9 (sic) unit in town,” was one comment. “I can’t imagine the village board backing this decision.”

Maurer readily admits he wasn’t thrilled with the idea of adding a K9 unit five years ago, but hefty donations rolled in to fund the program, and he acquiesced.

“There’s a lot of training to keep the dog certified, and Officer Ford has to go to every training session. There are vet bills, and other costs, too,” Maurer explained. “It takes Ford away from making regular stops. Our policy is that Officer Ford should be a dedicated K9 handler, and we can’t have a drug dog walking around a car during a routine stop.”

Once Oz, who has made a few drug busts, ages and cannot serve a police K9 unit, he’ll likely stay with Ford, but it will cost around $20,000 to replace Oz.

In a town with the budget constraints of Metamora, it may not be reasonable to continue the program, and that’s the reason the village board has for performing a thorough review of the program.