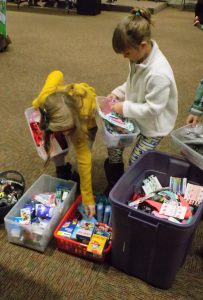 On Nov. 11, children and volunteers at Crosspoint Church in Eureka formed an assembly line to pack gift boxes for Operation Christmas Child. Just before Thanksgiving, the boxes are trucked to a Minnesota hub, then are sent to children in need around the globe. This year, Crosspoint assembled around 700 boxes. (Photo by Holly Eaton/for Chronicle Media)

A shoe box full of gifts may not seem like a very extravagant Christmas gift, but it may be the first, and only, gift a child in need may ever receive.

Operation Christmas Child (OCC) is wrapping up, and soon more than 10 million children around the globe will receive a gift box. Last year, 30,000 gift boxes were sent from Woodford, Tazewell, Peoria and McLean counties.

On Sunday, Nov. 11, the young members of SonChasers Children’s Ministry gathered with volunteers and staff of Crosspoint Community Church in Eureka for its annual packing party. Crosspoint joined OCC in 2008, and members begin accepting donations in summer and fall, and during vacation bible school.

Gifts are sorted and categorized, then lined up in an assembly line manner. After a short Gospel pep rally, peppered with prayers, the children line up, grab a box and stroll, single file, picking small gifts until the box is full. Boxes are filled according to gender and age categories of 2-4 years, 5-9 years and 10-14 years.

At the end of the line, each are met by a volunteer who outlines the child’s hand on the box lid and the two pray together for the child who will receive it.

Tangbakken learned first-hand that gifts of hygiene products can mean more to some children than the toys.

“A Romanian woman got a box while she was in an orphanage,” she said. “She said the best thing was a bar of Dove soap. She had never smelled anything like it” 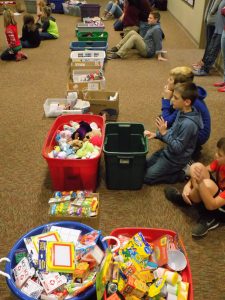 Members of SonChasers Children’s Ministry gather around Children’s Director Becky Williamson, before packing boxes for Operation Christmas Child. Crosspoint Community Church in Eureka joined OCC in 2008, and the church also serves as a drop-off location for families and groups who pack their own boxes. (Photo by Holly Eaton/for Chronicle Media)

In the box was a photo of the family who sent it, and a brief note. The woman was adopted when she was 13. Eventually, her new family helped her locate the family in the photo and she met them in person.

Tangbakken said the woman never used the bar of soap, and still has it.

“We don’t really know the scope of the meaning the shoe box will have, the impact it’s going to make,” she said. “We just know it makes a huge difference in the life of the child who receives one.”

OCC no longer allows candy, tooth paste, liquids and a few other items, Tangbakken said, because if a leak occurs, it can attract bugs and many countries will simply dispose of entire containers of shoe boxes, rather than look for the cause.

Founded in 1970 by William “Franklin” Graham III, the son of the late Billy Graham, the Samaritan’s Purse mantra is, “Helping in Jesus’ Name.”

Some countries accept the boxes, but are very strict with what is sent. Some countries, Tangbakken said, don’t accept them at all, but, sometimes missionaries are able to sneak certain boxes to some children in those areas. In those cases, limited items are packaged in plain white boxes. 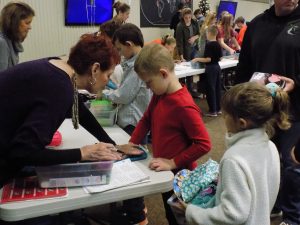 Volunteer Pam Tangbakken prays with a child over a gift box he assembled for Operation Christmas Child at Crosspoint Community Church in Eureka. Once the boxes are assembled, a volunteer makes an outline of the child’s hand inside the box lid, then they pray together before preparing the box for shipping so recipients can feel connected to the child who sent it. (Photo by Holly Eaton/for Chronicle Media)

“A lot of it has to do with customs, especially countries that don’t want OCC, they make it stringent and legalistic,” she said. “A lot of countries have a lot of varying religions that are opposed to Christianity and refuse any type of gifts.”

Along with international regions, OCC also sends shoe boxes to Native American reservations in the United States. Because many children on reservations live in conditions similar to developing countries, Samaritan’s Purse began including them in OCC destinations in 1998. More than 160,000 Native American children have since received a shoe box.

This year’s OCC drive ended on Nov. 19. All shoe boxes have been organized in containers and brought to St. Mark’s Lutheran Church in Washington, where they were packed on pallets, loaded into a semi-truck and shuttled to Minneapolis, Minn. for distribution.

For a $9 donation, Samaritan’s purse provide donors with a special label that will track the box all the way to its destination.

The organization also maintains a year-long shoe box program, that continuously sends gifts around the world. Directions on packing, shipping and tracking a shoe box may be found at their website, www.samaritanspurse.org.