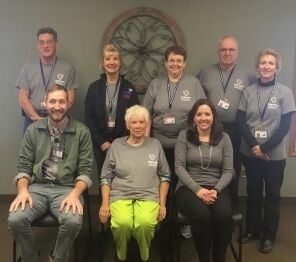 (MRC). The Medical Reserve Corps is a dedicated group of trained volunteers, both medical and

nonmedical that will assist the health department during a public health event or response.

The MRC meets on a monthly basis to discuss emergency preparedness topics, and conduct

trainings. MRC members are encouraged to participate in exercises and drills throughout the

The survey helped the Woodford County Health Department to identify the functional and preparedness needs among Woodford County residents. Planning for the award started shortly after getting funding in February 2017.

Throughout the following spring and summer months, health department staff and medical

selected survey areas, and putting together hundreds of information packets for community

In August 2017, the department sent out postcards to all of the households that could potentially be selected to participate.

Throughout the next month, 10 Medical Reserve Corps volunteers worked approximately 200 hours collecting survey responses from the public. As a result, 242 surveys were collected from face-to-face and online interviews.

In addition to general demographic information, residents were asked about individual household emergency preparedness activities, how they would receive information during an emergency, and whether they would evacuate if requested to do so.

Furthermore, residents were asked what they considered to be the top 3 disaster threats for their household and if they were aware of the services WCHD offered.

In total the survey consisted of 30 questions and took approximately 10 minutes to complete. The information gathered will allow local emergency response partners to better prepare and respond in a disaster. Results of the survey will also be used for community outreach and education.

The health department participates in multiple emergency preparedness meetings and

workgroups. Central Illinois Coalitions Active in Response Planning (CIL-CARP) is a multidiscipline group of emergency response agencies that share information and resources to

better prepare the region for emergencies of all kinds. The Central Illinois Public Information

information in the event of an emergency.