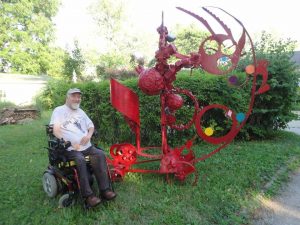 Sculptor Greg DePauw was fascinated with found objects, and frequently incorporated such things in his work. In this recent sculpture, “The Big Red Dragon”, DePauw incorporated a number of items, including a Fred Flintstone cookie jar.  (Photo by Holly Eitenmiller / for Chronicle Media)

There was his life before the accident, then after, and there was an enormous difference between the two. But there was always only one Greg DePauw.

The acclaimed Metamora artist, known for his indomitable facetiousness and expansive imagination, died in his childhood home March 27 of complications due to long-term paralysis. He was 61.

“There were a lot of layers, chapters, in his life, before and after he was hurt,” Greg’s brother, Doug DePauw said. “But he was always a risk-taker as a kid, and that was the continuity with him breaking his neck. Because of his strength, his resolve, because he always pushed the limits, he was able to thrive.”

Weeks before graduating from Metamora Township High School in 1974, Greg broke his neck performing acrobatics on a trampoline at his home on Davenport Street. Fred Schrepfer recalled visiting his lifelong friend at the intensive care unit just after the accident.

“He was in a halo, but he was glad to see me and we went on from there,” Fred said. “The amazing thing is, I took it so much harder than he did.”

Doctors said Greg would never leave his bed, that he would never regain mobility. These forecasts were absolutely unacceptable for Greg, Doug said. 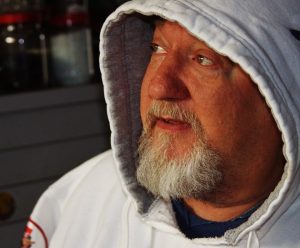 Celebrated Metamora artist, Greg DePauw, passed away in his home March 27 of complications related to years of paralysis. Just before he graduated from Metamora Township High School in 1974, DePauw was involved in a trampoline accident that rendered him a quadriplegic.

“All these ‘no, no, no’s’, and look how far he went in life. He surrounded himself with ‘yes’ people,” his brother, who, like their father, is also an artist, said. “People who expected his orneriness and expected him to not do things as normal.”

Perhaps the most telling story of Greg’s audaciousness, is that of the Standard gas station and the state police car.

“He was just a high school kid working up there and we found the spare keys to this police car,” Schrepfer recalled. “So we said, ‘Let’s make a movie!’ We opened the trunk and there was his uniform, so Freddie Shram dressed up like a cop and we thought up a quick plot.”

Freddie took the car for a spin around the block, accidentally blaring the sirens, then pretended to beat up Fred at the gas station as Greg manned the camera.

“If there was an audience, they’d do anything just to get a thrill out of it,” Doug said Fred and Greg, “and if there was punishment, they would take it.”

After the accident, Greg quickly resumed art, first by mouth drawing, until he regained some mobility in his hands and began to use a wheelchair while at the Craig Rehabilitation Center in Colorado. “Getting the wheelchair was a big deal,” his brother said. In 1982, he graduated from Illinois State University with a degree in Art Education, and became an instructor with the Sun Foundation’s Art in the Woods Program.

At home, he taught art; in the community, he mentored as an artist-in-residence at a number of local schools. In 1997, he coupled his passions for teaching and hot rod cars and started the ArtRod Foundation, a non-profit organization geared to bring art instruction and materials to regional classrooms.

“I like to teach kids watercolor. Watercolor is hard, it’s easy to make mistakes and that’s what I want them to do, because that’s how life is,” Greg said in 2004, “Then, I can show them how to fix it and use that as a way to teach kids how to overcome difficulty.”

For the foundation, Greg would load his cherry red wheelchair-accessible 1937 Ford Sedan with art supplies and visit local schools. His motto; “Can Do Attitude.” On his own time, he created “dash bars”, bars fashioned from car dashboards for a southern restaurant chain called Bobby Socks. Greg took particular pride in the resin and metal hot rod sculptures he created in recent years, some of which he named Corsair Extraordinaire”, “Grean Meanie”, and “Peace Hawk”. 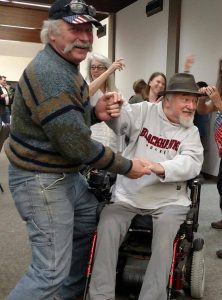 Greg DePauw remained in his childhood home throughout his life and was very close with his family and friends. In this February photo, DePauw’s lifelong friend Fred Schrepfer “danced a jig” with DePauw. The two became friends in kindergarten. (Photo courtesy of Doug DePauw)

“The cars are my own design,” Greg said of the sculptures. “It’s really a big deal, casting them from polyester resin. I really like them.”

“We both liked Rat Fink,” Fred said of the Ed “Big Daddy” Roth’s radical rat art and the hot rod car culture that accompanied the comics. Greg liked junk, too, found things, broken things, and his home was an organized hodgepodge of all sorts of objects, which he incorporated into his sculptures.

“I love odd and unique shapes in my sculptures,” Greg said in 2016 interview. “I can’t get enough junk!”

The word “junk” hardly describes the art. Greg’s award-winning work has been acquired by collectors, corporations and institutions, including the Museum of Modern Art in New York. In 2002, Greg was first to be awarded the Chronicles of Courage Artistic Award by Very Special Arts and the Kennedy Center in Washington D.C.

The best compliments, Doug said, were national shows and competitions, where Greg’s handicap remained unknown to judges and critics. “When they were looking at his art, it was with all the artists, and it didn’t stand out because he was handicapped.”

Art was not a hobby that gave a physically disabled man something to do, his brother explained. Art was what Greg was meant for, wheelchair or not.

It was the act of the vanishing wheelchair. Spend enough time with Greg, and there was no wheelchair, there was just Greg; a tenacious character fascinated with the curiosities of life. At Greg’s funeral, Doug said he stood for four hours shaking hands with the steady stream of friends, listening to anecdotal tales of his brother. 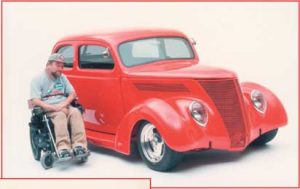 For a number of years, Greg DePauw devoted is time to the ArtRod Foundation, an organization he founded to motivate young people through art. DePauw redesigned a 1937 Ford Whitetail to accommodate his wheelchair, had the vehicle affixed with hand controls and drove the “ArtRod” to various events and school functions. (Photo courtesy of The ArtRod Foundation, Inc.)

“There were all these people wanting to tell stories about Greg, varied stories and situations that all ended in laughter,” he said. “In the past year, we would go to Greg’s for porch parties, and, I mean, we just laughed and laughed. Your face would hurt.”

Always, Greg was quick to thank the many who supported him and helped him achieve his goals.”No one ever does anything alone,” he once said. “My ability to do things in the community is due to the fact that I surround myself with a lot of ‘can do’ people who enjoy life and art. Nobody accomplishes anything worthwhile by himself.”

Greg was buried St. Mary’s Cemetery in Metamora, in a coffin he customized himself. Known for his love of broken things, a local funeral home offered Greg a damaged casket a few years ago, and he happily accepted.

As was his fashion, he carved playful motifs from of the shell and augmented it with whimsical objects. The interior was animal themed with leopard print.

“Of course he did that to his own coffin,” Doug said. “That’s Greg DePauw.”