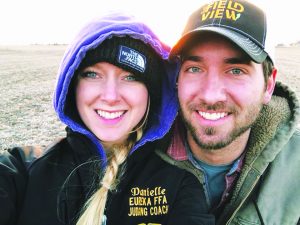 When Danielle Stewart was a Eureka High School freshman, she went to a Future Farmers of America Meeting, afterward vowing never to return.

“I was really quiet, and I would’ve joined, but I was so scared I didn’t go back,” she explained. “But they encouraged me to go back, and it changed me as a person, and helped me be myself. As I got involved, I really fell in love with the program and Ag.”

Stewart, who graduated from EHS in 2008, is one of the highs school’s two FFA advisors; the other is agriculture teacher Joseph Heavner. Stewart took over as an advisor last year after Jason Bachman stepped down.

“Jason approached me and asked if I still have an interest in FFA and recommended I apply when he stepped away,” she said. “I was thrilled. It’s been a lot of fun so far.”

It may be a given that the goal of FFA is to promote Agriculture, but through its events, competitions and projects, FFA members develop strong communication and decision-making skills and emerge as leaders.

“I love to try to tell people about it and explain it. The average person doesn’t really understand what it does for students,” Stewart said.

“When I finally joined my junior year, I became involved in the teams, I learned to be a public speaker and articulate myself and be confident.”

After high school, Stewart enrolled at Illinois Central College, then attended the University of Illinois Urbana-Champaign where she majored in animal science with a minor in crop and soil management.

She worked as a livestock judge to pay for school and after graduation she continued to help as an FFA volunteer. Stewart and her husband Garret run a first-generation Woodford County farm, Stewart Family Farms, along with Garret’s brother Derek. 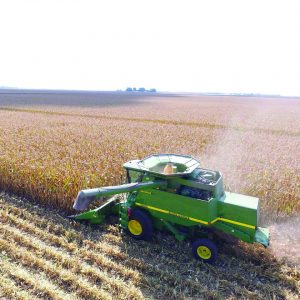 They grow corn, soybeans and wheat and she keeps sheep as “hobby livestock”, along with housing other sheep for a local family.

“I do plan to bring the students to the house to look at my sheep and use my other connections in the sheep industry so they can practice livestock judging, evaluating and placing,” Stewart said.

Stewart’s view of FFA and its personal benefits is reflected by EHS junior Maria Cottrell. Cottrell is the student president of FFA, and has been involved with the organization since her freshman year.

“Ever since I was younger, my older brothers were in it, and I saw how much fun they were having and the impact it had on their lives,” Cottrell said. “I joined and started going to the meetings and the conventions and I made a lot of friends.”

FFA changed her perspective of teamwork and leadership, she said, and becoming an office has taught her leadership and communication skills.

“It’s definitely more than cows and farming. It’s coming together and helping your average person understand agriculture and helping getting people to come together,” she said. “Sometimes you just need to take a country road and really see how farms work, how farmers feed the world and how important Ag is.”

Cottrell’s family owns and operates Stone Leaf Nursery. Both of her brothers now work there, and her brother Samuel pursued a degree in horticulture, one of the many career choices available in the agriculture business.

Cottrell is thinking of pursuing a horticulture degree, but said she’ll probably make a decision on that next year. The array of skills she’s learned from participating in various team projects have helped her become better acquainted with her options. 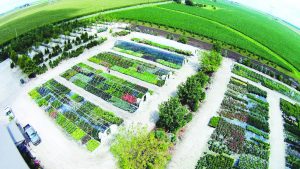 Aerial view of Stone Leaf Nursery in Eureka. The business is owned and operated by the Cottrell family. EHS junior Maria Cottrell is following her brothers as a member of the Future Farmers of America and serves as president of the local chapter of FFA. (Photo courtesy of Stone Leaf Nursery)

“Horticulture, veterinary science, even welders, mechanics … there are all kinds of things involved in farming,” she said. “The study of chemicals, soils, plants, animal judging. CDE’s really hit on different parts of agriculture.”

CDEs are Career and Leadership Development Events, something FFA is heavily involved in. Different teams are devoted to specific areas of agriculture. In November, the EHS agronomy team, which studies the science of soil management and crop production, took 10th place at the National FFA Convention & Expo.

“Basically, you can join and chose to be on a team. There’s something for everyone,” Cottrell said. “There are all kinds of events that we practice for and compete in.”

Along with studying and practicing ag-related subjects, members also participate in leadership and communication exercises, such as parliamentary procedure, which teaches students how to organize and run meetings, articulate themselves and make decisions.

“FFA has taught me leadership skills, how to communicate with people, with new members, and it’s helped me in my future of being a leader,” Cottrell said. “Without ag, there would be no human life. It’s important to speak to the younger kids about ag and spread the word that it’s not just about farming.”