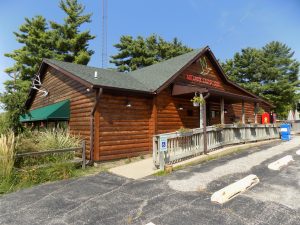 Back in the 1930s, Midway Duck Inn in Lowpoint began as a meeting place for Woodford County locals to watch movies and swap hunting stories over a drink. It once hosted its own baseball team and was, for a time, a veteran’s hall. (Photo by Holly Eitenmiller / for Chronicle Media)

Some are wondering where the restaurateur has been since closing New Amersterdam in Peoria to make way for its leveling.

This year, Riverfront Village was razed to make way for a parking lot, and with it went any evidence that New Amersterdam ever existed there. As for Todd Waldschmidt, he’s been laying low in Lowpoint.

“This has been a gathering place since from 1933,” said Waldschmidt of Midway Duck Inn, over which he and his wife Megan assumed ownership in January 2018. “They used to play movies here, and they had their own ball team.”

Inside, trophy fish and fowl hang on wood paneled walls between Ducks Unlimited prints and old photos of locals showing off fishing and hunting game.

The dining room, decked out in Mossy Oak camouflage carpet, seats around 100, and, just past the cozy bar is a fenced-in patio where guests dine outdoors at tables with umbrellas. It’s a bit more Midwestern than the other establishments Waldschmidt has managed.

When Ken and Jeannie Marini sold the restaurant, they asked that he maintain Midway’s rustic theme and traditional recipes, like pan fried chicken and deep fried catfish.

“Jeannie said they thought about retiring for 10 years, and they had opportunities to sell it, but they didn’t want to see it change,” Waldschmidt said. “We’re stewards of it, and, while simultaneously keeping the historical part alive, we’re having fun with the food, food you can’t have everywhere else.”

Fried chicken, catfish and bluegill, along with fluffy corn fritters and Midway Chili are among the popular menu items, with recipes dating to the 1950s. But Waldschmidt, who grew up in the restaurant business, has added his own flavor to the menu.

Waldschmidt’s father Terry owns Jonah’s Seafood House, and, for many years, he worked with his family there, managing Jonah’s 2601 Oyster Bar, the adjoining restaurant and its busy banquet hall.

Many of Jonah’s recipes were created by his mother Pattie, who passed away in 2010. Pattie’s sweet au gratin potatoes and Dijon honey dipping sauce are among on the Duck Inn menu.

“We’ve added jambalaya, that’s a personal favorite, and Rich has come up with some variations of some of the Duck Inn favorites,” Waldschmidt said.

Rich Goossens studied culinary art at at Johnson & Wales University and was the chef at New Amsterdam. 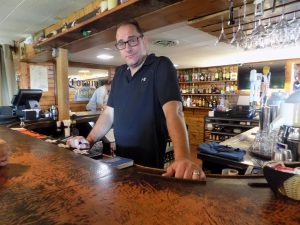 When Riverfront Village was slated for demolition in 2016, Todd Waldschmidt closed his restaurant, New Amsterdam Bar & Restaurant and began searching for greener pastures. At the beginning of 2018, the restaurateur took over ownership of Midway Duck Inn in Lowpoint. The popular meeting place dates to the 1930s, and the restaurant is known for Midwestern favorites. (Photo by Holly Eitenmiller / for Chronicle Media)

Change happens, though, and evolution is necessary, he said, but aside from introducing a few new recipes and some variations, he and his wife intend to keep the place running on the same path on which it began more than 90 years ago.

Since its start as a midway meeting place for Washburn, Lacon and Lowpoint residents, the building has served as a movie theater, a veteran’s hall, and, of course, a restaurant.

The original house, where the first bar was situated, burned down many years ago, and, for a time, there was  trailer parked in its place. Regardless of, the property still rests “halfway between heart and home” as Waldschmidt puts it, and a complete evolution would likely send the Duck Inn’s longtime fans into a tailspin.

On hearing of the change in ownership, patrons like Sandi Eaton of East Peoria want to know what’s changed about the place.

“Are the hummingbird feeders still hanging outside the windows?” she asked.

They are, and diners continue enjoy the appearance of the tiny birds in the spring and summer months. Situated deep in the farming valley of Woodford County, the restaurant is  a haven for wildlife; hawks, eagles, geese, ducks and deer are often spotted nearby.

As was the practice at Jonah’s and New Amsterdam, Waldschmidt prints the Duck Inn menus on a daily basis, updating them with featured cocktails like The Fisherman’s Friend and the seasonal brews of Leinenkugels and Anchor Stream.

Freshly printed menus mean that customers can call in advance and have birthday, anniversary or other celebratory messages printed at the top.

The restaurant opens Mondays, Wednesdays and Thursdays at 3 p.m. and at noon on Saturdays and Sundays. They close at 9 p.m. on most nights, sometimes a little later for those who stay to chat with Waldschmidt and his wife and the staff, who are constantly on hand to enforce the Midway Duck Inn Rules, which are listed at the bottom of the menu.

“Please keep your hands and feet inside the Duck Inn at all times. Have a drink. Have fun!” the rules state. “Let us know what you like, love hate or just say ‘Hello’, we’ll listen. We want you to be happy and enjoy yourself.”