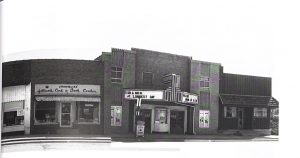 The old Woodford Theater at 113 S. Main St. in downtown Eureka. The Hallmark Store is to the left and the Cottage Café, formerly known at one time as Susie’s Restaurant, is to the right. (Photo courtesy of Eureka Public Buildings)

On the afternoon of April 2, 1937, an arc lamp within one of two new Simplex Peerless film projectors switched on, and The Woodford Theater presented its first movie, “Sergeant Murphy”, starring Ronald Reagan. It was the former president’s second feature film.

“U. Bailey of Princeton … decided to build a modern theatre building here,” read a March 31, 1938 Woodford County Journal article, “which is now completed and ready for the formal opening. For the first time Eureka has a building erected and equipped especially for the business, modern in every detail.”

Movies were first shown in town at a nickelodeon that Dr. N. Melaik and Clark Brown setup in what was called the “Crawford Building.” The nickelodeon, so named for its admission price of a nickel, ran from 1910 until around 1914, when Dr. Melaik opened “Air Dome”, an open-air theater that occupied the space where the theater was later built.

The advent of sound ended the nickelodeon era, and more elaborate theaters were built to show “talkies.” In the 1920s, the number of air conditioned theaters began to grow, as did the crowds. When it opened, the modern Woodford Theater featured plush velvet curtains that framed a 14-by-18 foot screen with seating for more than 400 people. 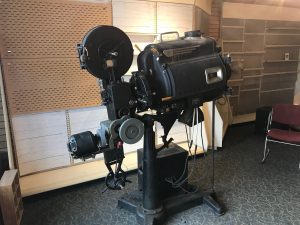 An old movie projector remains in the upper floor of 113 S. Main St. in Eureka from the days when the building housed the Woodford Theater from 1938 to 1982. (Photo by Jack McCarthy/Chronicle Media)

According to a Woodford County Journal clip in the book “Eureka, Illinois, Public Buildings”, by Carol Anderson, “Admission was 25 cents for adults and 10 cents for children under 12. Teenage girls worked as ushers with flashlights to show you to your seat in the darkened theater. On hot summer days, the air conditioning was a wonderful luxury.”

During the 40s and 50s, big names like Gene Autry, Gabby Hayes and Roy Rogers appeared frequently on the screen. In what was later called “The Golden Age of Serials, motion picture companies produced a steady stream of film serials, such as “Dick Tracy Vs. Crime, Inc.” and “Secret Agent X-9”.

Then, movie goers phoned the number “49R” to learn about upcoming features, and the Woodford Theater also served as a community center for groups presenting dance and music recitals.

In time, attendance began to decline and the once-elegant theater aged badly from poor upkeep. Former Eureka resident, John McCoy, now the assistant director of Design and Media at McMullen Museum of Art at Boston College, wrote of the theater on his blog, “Pathetic Fallacy.”

“… the time I knew it in the 70s the theater had become a sad thing, with patches of the original carpeting replaced here and there by linoleum, haphazard electrical conduit tracing the walls like vine, and a semi-functional bathroom,” McCoy wrote in a March 28, 2019 entry. 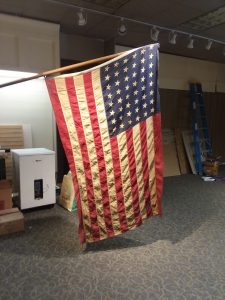 Among the items found in the upper floor of the building that once housed the Woodford Theater is a 48-star American Flag. The 48-star flag became obsolete after 1959, the year Alaska and Hawaii officially were adopted into statehood. (Photo by Holly Eaton/for Chronicle Media)

McCoy’s early 1980s recollections summon the image of an aging theater that attracted a smattering of bored, rowdy teenagers shouting out lines from B-Movies that played there over and over again.

The theater shut down in 1982 and two years later, the late Virgil Chambliss bought the building and it became part of the Hallmark store next door. In 2018, James Chambliss sold it to the Mennonite Central Committee, and will be used as an expansion of the Et Cetera Shop.

Along with the antique cameras, a 48-star American Flag was recovered from the upper floor, as well as a few film reels, one with film. There also is a bundle of perforated tickets, a rope barrier, a Bic Lighter film preview and two Wenzel Co. hand crank film rewinders.

Representatives of the Mennonite Central Committee have not said what will become of the antique items, but the store, which will feature furniture, is expected to open sometime this summer.