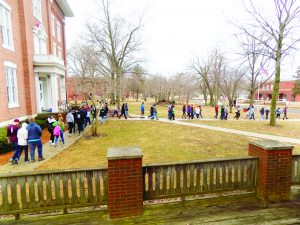 During spring break at Eureka College, high school freshmen crammed into Room 205 at Burgess Hall, where Andrea Ingwersen waits with a nicotine vaporizer, the words “It’s Not Cool to JUUL” on the screen beside her.

On March 13, around 400 first-year students from Woodford County’s five high schools converged at the campus for the 2019 Teen Jamboree, a one-day conference aimed at addressing challenging teen issues.

The event is coordinated through the OSF Illinois Neurological Instituter’s “Think First Program”, and is hosted by the college. Four county agencies sponsor and participate in the event; University of Illinois Extension, Woodford County court services and the county’s health and sheriff’s departments.

“We confront things we know are obstacles for teenagers, and give them resources to keep them better equipped,” said Shari Rich, Eureka College associate dean of students. “We run with social issues related to teen success, sports nutrition, eating disorders … this lets students know we’re here and we have things going that they can rely on.”

The morning began with an hour-long session, “Ending the Silence,” presented by the National Alliance of Mental Health. Afterward, students ventured off to join the first of two discussions they would attend before lunch and the closing session.

This year’s jamboree was arranged in a cafeteria plan, with 13 topics students could pick from. Among them, “Play for Peace”, “Teen Depression, Get the 411”, “Sports Nutrition: The Winning Connection” and “Is That Text Worth It.”

“They got to go to the things that’s most effecting them, versus, being told which sessions to go to,” OSF Committee Chairman Lisa Maynard said. “This is a new way of doing it where we let them choose where they wanted to go and focus on what they wanted to hear and learn.”

The program is in its 11th year, and, in addition to giving students the chance to pick their sessions, they could scan a QR code and provide feedback after the jamboree.

The matrix bar code was printed on the back of the conference schedule, and can be scanned by a cell phone.

“We really want their feedback, especially this year, with the changes we’ve made,” Maynard said. “We’ll be able to see which sessions were most popular, and how they impacted the students.”

Ingwerson, the health department’s health educator, brought a JUUL nicotine vaporizer and spoke to students about the lure of e-cigarettes and the danger they pose for teens to easily become addicted to nicotine. 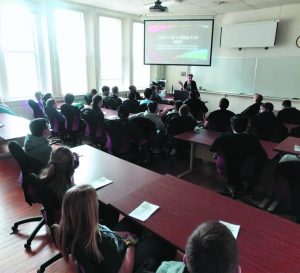 With the growing popularity of e-cigarettes, Maynard said college students volunteering at the conference have asked that Ingwersen bring her presentation back to the campus after break to address the issue returning students.

Travis Guthman, owner of the Pizza Peel in Lacon, volunteered to host a session called, “Is that Text Worth It?” A few years ago, Guthman was texting and driving and wrecked his truck. The father of three underwent several life-threatening surgeries and had to learn, more than once, to walk again.

“With my particular program, I focus on a lot of brain and spinal cord injury prevention so I focus on things that go on with crashes,” Maynard said. “Teens think if they’re in an accident, that they’re impervious, and they don’t think of the consequences of improper seatbelt use, texting or getting in the car with someone who’s under the influence.”

“In ‘#OMG #DIDIJUST POSTTHAT’, the detective talks about safe technology use,” Maynard said. “He discusses sexting and other social media issues and the consequences of how anything that’s posted can be shared and distributed.”

The overarching theme of the jamboree, she said, was healthy emotional, physical and mental living. After lunch, the students reconvened at the Becker Auditorium for an engaging triple-screen presentation that summarized the day’s topics.

“Overall, the goal is to help teens think ahead, think things through and have resources they can depend on,” said Maynard.

The jamboree was a collaborative effort, that included the assistance of Eureka College student volunteers, the health department’s medical reserve corps and a host of local corporate donors.