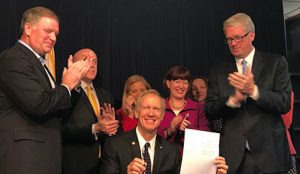 While Illinois politicians basked in the accomplishment of passing a state budget on time, the bond-rating community gave a collective “Who cares?”

Despite last week’s press releases and press conferences touting the budget accord and a state budget being in place prior to the start of the fiscal year, S&P Global Ratings, an independent credit risk research agency, kept the state’s bond rating at BBB-, the agency’s lowest level. S&P said the state hasn’t warranted being moved from one step above junk bond status.

“Among the state’s leading credit risks are its fiscal structure, which in our view, remains out of balance, a still-elevated unpaid bill backlog, absence of a budget reserve and distressed pension funding levels,” the agency said in announcing the state’s bond rating status quo last week.

S&P analysts said the state’s budget falls short of achieving structural balance as it relies on $800 million in inter-fund borrowing and $270 million of net proceeds from the sale of the state-owned Thompson Center in Chicago. They note the state is also on the hook for up to $400 million in previously unaccounted-for costs related to prior step increases the courts have ruled are due to state employees.

Analysts worry that a dissipating of the beneficial revenue the state has seen from the federal Tax Cuts and Jobs Act, the economy turning south and the impact of foreign countries’ retaliatory tariff increases on Illinois businesses could all impact the state’s budget going forward.

“Any additional unanticipated budget stress arising from, for example, weaker than expected economic performance, would only exacerbate the state’s structural imbalance,” the bond rating company said.

The S&P analysts are also concerned with the state’s fixed costs, including debt service, pension contributions and employee health benefits, eating up 31 percent of general fund expenditures, more than double the median for U.S. states.

“We estimate that by fiscal 2025, pension contributions from the state’s general fund will increase by $1.7 billion, or 24 percent,” they said.

On the positive side, analysts pointed out, the state authorized the issuing of $6 billion in general obligation bonds to refinance a portion of the $15 billion in unpaid bills in November. That, they pointed out, enabled the state comptroller to pay delinquent Medicaid bills, and in the process, keep the federal government from intervening over the state’s cash management.

That move alone, however, they said, has not done enough to get the state out of the woods.

“Apart from the bonding strategy, which in our view amounts to financing state operations with long-term debt, policymakers have made little headway against the bill backlog,” analysts said. “Additional progress would almost certainly require the politically unpalatable combination of lower spending and more revenue (higher taxes).”

S&P analysts note that even after the backlog borrowing, which leveraged federal Medicaid matching funds, the comptroller reports a current bill backlog of $7.1 billion.

“This, along with the state’s long-term liabilities, precariously balanced operating budget, and lack of budget reserve, continue to weigh on the state’s prospects for a higher rating,” analysts said.

Bobby Otter, budget director for the Center for Tax and Budget Accountability, said in an email that the agency is adding up all the appropriations, reading the Budget Implementation Act and analyzing the budget and will be issuing a report on the state’s fiscal year 2019 budget in the near future.

He pointed out that it has been four years since the state passed a budget prior to the start of a fiscal year.

“For the first time since FY 2015, Illinois passed a budget before the state of the fiscal year,” Otter said. “The FY 2019 budget passed with overwhelming support from both parties and set spending of general funds at $38.5 billion in the upcoming fiscal year.”