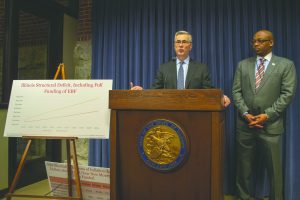 Center for Tax and Budget Accountability President Ralph Martire (left) and state Rep. Will Davis, a Chicago Democrat, discuss a report on Illinois’ evidence-based school funding model during a news conference Wednesday at the Capitol in Springfield. Martire said the added investment in education each year would have to double to allow all districts to meet a point of adequacy within 10 years. (Photo by Jerry Nowicki/Capitol News Illinois)

SPRINGFIELD — Illinois’ new evidence-based school funding model is effectively driving added funding to the state’s neediest school districts, but the state must double its annual added investment in the formula if districts are to reach funding adequacy in a timely manner, according to a report released Wednesday by the bipartisan Center for Tax and Budget Accountability.

The evidence-based model was passed in 2017, giving each public school district an adequacy target based on several factors tied to student performance. Those furthest from their target are prioritized when new funds are added to the formula.

Illinois has 707 districts that do not meet their adequacy target, and CTBA President Ralph Martire said if the statutory minimum of $350 million is added to the formula each year, the earliest all districts could meet adequacy levels is 2050.

“That leaves generations of students in underfunded schools,” Martire said.

For the state to make up a $7.35 billion education funding shortfall and meet adequacy levels within 10 years as specified in the legislation, Martire said, the actual annual funding increase would have to be closer to $779 million.

At a Capitol news conference detailing the report Wednesday, Martire said the numbers show how necessary a graduated tax structure touted by Gov. J.B. Pritzker will be to the process of increasing investment in schools.

“It’s crucial we start making these needed, long-term fiscal structural reforms or we cannot fund fully the evidence-based formula, and that will continue to shortchange the education for millions of children in our state,” he said.

Martire said the graduated tax is a “textbook definition of fair taxation,” adding that from 1979 to 2015, incomes for the wealthiest 1 percent of Illinoisans grew by 179 percent, while the bottom 99 percent saw growth of only 9 percent.

Martire and Rep. Will Davis, a Chicago Democrat who sponsored the evidence-based model in the House when it passed, said a graduated tax is “a good first step” in addressing the state’s structural budget deficit, even though revenue from it won’t be realized until 2021 at the earliest.

Other steps such as reforming the pension ramp will be needed as well, they both agreed.

“That’s not the only type of revenue resource we’re looking at,” Davis said. “It may need to be a combination of things.”

Without these reforms, Martire said, the state would not have the resources to add to education funding without making cuts to already underfunded human service or other programs. For this reason, he said, it is unlikely to see a $779 million increase to education in this year’s budget, even though Pritzker has proposed funding slightly more than the mandated $350 million increase.

“We now know how inequitable the old school funding formula was,” he said

He said 79 percent of new funding from the evidence-based model is going to school districts that educated 84 percent of the state’s African American students and 75 percent of Latino students.

Davis said when he attends a fellowship group with legislators from other states, Illinois is now talked about as “one of the leaders” in education funding reforms, as opposed to one of the worst in the nation as it was under the previous funding formula.

“We are now talked about in a different way,” he said.