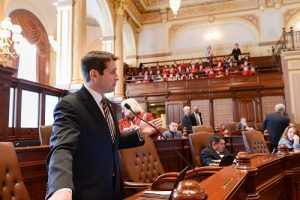 “The judge goes on to say it’s not just about the dollars. It’s about reforming the system so we can have positive outcomes in the classroom,” said State Sen. Jason Barickman (R-Normal).

A judge’s ruling in Connecticut last week that the state is failing its “constitutional duty” to provide children with an adequate education could change not just how Illinois pays for schools, but what the state is paying for.

But the ruling doesn’t focus on how much more the state needs to send to schools. The judge instead takes issue with what the state is getting for its money.

“What made this really unique,” Barickman said. “The judge goes on to say it’s not just about the dollars. It’s about reforming the system so we can have positive outcomes in the classroom.”

The Connecticut ruling calls graduation standards and rising graduation rates “meaningless” because almost any student could meet the low bar set to get a diploma. The judge takes a similar issue with the state’s teacher evaluations. He says teachers are almost always rated as proficient, even when their students fail basic tests.

“Why bother measuring students if it never has any direct connection to how they’re being taught,” he wrote.

“For those who simply say, ‘Let’s throw more money at this problem,’ I think there’s ample evidence that more money doesn’t always get you the answers,” Barickman added.

Education reformers say the Connecticut ruling could be a game changer because it doesn’t focus on how much the state needs to spend. The judge says he wants new graduation and evaluation standards. He was silent on questions about a school funding price tag.

Barickman said while Illinois’ school funding commission should talk about the Connecticut ruling, he’s not sure lawmakers will address it.