Democratic candidates for Congress accused incumbent Republican Peter Roskam of lacking accountability during a Glen Ellyn forum last week and each pledged to be more accessible and answerable if elected to represent Illinois’ Sixth District.

Seven Democratic candidates also offered views on a wide range of issues, during the two-hour forum sponsored by the League of Women Voters of Glen Ellyn. The winner of the March 20 Democratic primary faces Roskam in the November General Election.

Roskam, unopposed for the Republican nomination, repeatedly drew criticism for what Democrats called his lack of access by constituents and limited town hall meetings.

“I (was) Illinois chief of staff to Congressman Bill Foster (D-11th) and in that capacity I did exactly what Peter Roskam does not do,” attorney Carole Cheney told more than 400 persons last Wednesday at Glenbard South High School. “I met with constituents, I held town halls and I made the government work.”

The Sixth District includes portions of DuPage, Kane, Lake, McHenry and Cook counties. Roskam has served as representative since 2007. 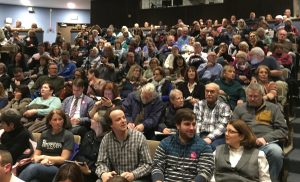 Around 400 people crowded into a theater at Glenbard South High School last week for a forum featuring candidates for Congress from the 6th Congressional District. The session was sponsored by the League of Women Voters of Glen Ellyn. (Photo by Jack McCarthy/Chronicle Media)

Between Democrats the tones were cordial, with broad agreement on issues ranging from election security and campaign finance, health care and reproductive rights, gun control and support for immigration reform.

“These efforts at voter suppression — whether its pulling back the Voting Rights Act, seeing what’s happening in gerrymandering in the states and even the Russian electoral hacking — you can understand why the Republican Party has been so silent,” said Casten. “They depend on disenfranchisement. (Nothing changes) if we don’t get Democrats in control.”

“I am a breast cancer survivor and three years ago I was going through chemo and our insurance company of 20 years informed me they weren’t going to cover us the following year,” said Mazeski. “This was alarming … but the Affordable Care Act came through for me.

“Peter Roskam and Donald Trump want us to believe that repealing the ACA and Medicare is in our best interest. I’ll bet that all of us in this room agree that is simply not true.” 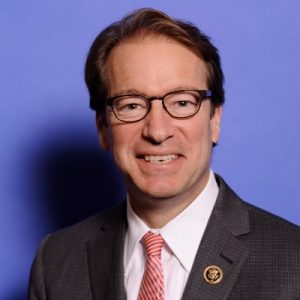 “Health care is a right, not a privilege,” she said. “Universal health care is incredibly important to me. Right now we spend so much money on administrative costs with our insurance companies that it’s absolutely ridiculous. … We could save several trillion dollars that we could put back into our health care system.”

“So many women in this country should be so proud we’re standing up,” she said. “We need to encourage everyone to stand up. Because the more we stand up and the more we fight it, the sooner we’re going to end it.”

“Reinstating the assault weapons ban is a good place to start,” said Huffman. We’ve got to ban bump stocks, we’ve got to ban high-capacity magazines and silencers. These guns are made for the military, they’re not made to be on our streets.”

This time, national Democrats see the 6th District as an opportunity for a pickup.

Roskam, however, has advantages in funding ($1.3 million on hand last October) plus recognition and incumbency. Politico said the race is among the Top 10 nationally to watch while the Cook Political Report rates the district as a tossup. Two other election analysts see the district as still leaning Republican.