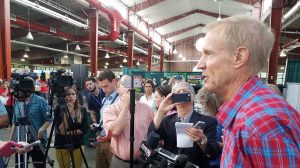 Private citizens are doing what Illinois’ lawmakers wouldn’t do, and that’s create a foundation to accept donations for upkeep and at the state’s two fairgrounds.

Gov. Bruce Rauner celebrated the creation of the State Fair Foundation today during Agriculture Day at the Illinois State Fair in Springfield.

Rauner said that between the Springfield and DuQuoin fairgrounds, there’s $180 million in deferred maintenance, and that taxpayers shouldn’t be on the hook for all of that. Rauner said there are millions of dollars in private donations from agriculture businesses that Illinois’ fairgrounds are missing out on.

Rauner said upkeep at the fairgrounds couldn’t wait for political games to play out in Springfield.

The governor has been pushing for the foundation’s creation since he’s taken office. A measure creating one stalled in the Assembly. Regardless, private citizens decided to move ahead with the foundation, which was announced today.

“These are beautiful old buildings, some are 80, 100 years old, beautiful red brick, beautiful stalls, but the roofs leak, the walls are cracked — we’ve always got to be concerned with safety.”

Foundation board member John Slayton said priorities will be determined by the board, which is made up of mostly private citizens. The directors of the Department of Agriculture and the Illinois Historic Preservation Agency will be honorary, non-voting board members.

Rauner said the foundation’s interactions with the state will be open to the Freedom of Information Act.