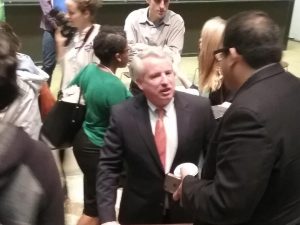 Democratic candidates for Illinois governor say the state has to stop the social injustice of negatively impacting the environments of its poorer residents.

“Why are diesel trucks not allowed on all of Lake Shore Drive, but they are allowed on the Dan Ryan Expressway?” candidate Chris Kennedy asked. “It violates social justice.”

Candidates Daniel Biss, Tio Hardiman, JB Pritzker and Kennedy also all have committed to moving Illinois to 100 percent renewable energy and away from coal-fueled power within 10 years.

Appearing Saturday in the University of Illinois at Chicago’s Science and Engineering South Building for the first-ever Sierra Club Illinois PAC Gubernatorial Forum, the candidates all stressed their dedication to the environment.

Biss said we are at a unique time in our country and as a progressive movement, noting that the attacks coming from President Donald Trump on vulnerable people, women and the planet are unprecedented.

“That creates a unique responsibility on the part of state government to be the front line of defense against these vicious attacks,” Biss said. “Because of that feeling of movement, we have an opportunity to build a different kind of politics than we’ve seen before in the state of Illinois which is so, so sorely and urgently necessary. … There is a much greater understanding of the deep and fundamental connection between the fight for environmental justice and the fight for racial justice.”

Hardiman said he is committed to the environment and environmental issue, noting he camped out in Flint, Mich. working to improve drinking water for residents there.

“When I saw that water coming out looking like syrup, I had no other choice,” Hardiman said. “I went there and stayed down there for two or three days in a row. I lost sleep there and everything, but it was OK because I saw kids down there who could not drink decent water … We need a governor like Tio Hardiman in this state who is going to stand up and speak truth to power. I am not your traditional Democrat. I’m not trying to be politically correct.”

Kennedy said people protect what they love and that there are amazing places in Illinois that need protecting. 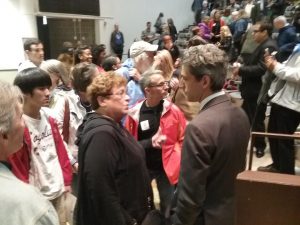 “I’ve been to Africa, but never on safari. I can’t believe the savannahs there are as beautiful as the one in Lake County along the Des Plaines River Trail,” Kennedy said. “I want everyone to love what I’ve seen. I want it to exist for my children, for their children, and for their grandchildren.”

Pritzker, who had to leave for prior commitments after making an initial statement, said the state is under siege from Gov. Bruce Rauner and President Donald Trump.

“Bruce Rauner has, in his Koch Brothers right-wing network, sold out this state,” Pritzker said. “He has sold it out in favor of profits over people, and we’ve got to stand up to them. Our endeavor must be to say ‘no’ when they say ‘It’s OK if we pollute the air and make it harder to breathe’ to stand up for the profits of the fossil-fuel industry or ‘It’s OK to poison our kids with lead’ because they don’t want to pay for pipes.”

The Rev. Booker Vance, policy director of Faith in Place, an organization working to promote renewable energy sources and energy efficiency in Illinois, said it is evident that environmental and racial injustices are linked. He said communities of color are impacted by negative environmental factors “first and worst.” 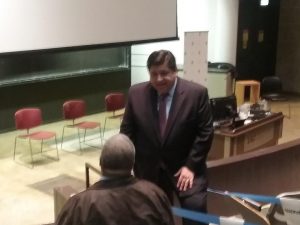 He said the candidates’ 10-year time line for the state’s transfer to renewable energy is an eon away for communities of color.

“Ten years might not seem like a long time but our communities are hurting now,” Vance said.

Biss said there will be continual projects on the road to renewable energy and he would commit to providing renewable-energy efforts to areas that have dealt with coal-powered power plants and other economically struggling areas.

“It is not going to be 10 years of waiting, waiting, and then a lightning bolt is going to come down,” Biss said. “I am happy to have projects first built in communities that have been left behind.”

Kennedy said that he would also be in favor of giving cities that have had their environments negatively impacted by energy projects the first shot at renewable-energy projects.

“I think it is going to take 10 years to amp up the work,” Kennedy said. “We need to provide those communities where existing energy jobs are threatened with a safety net.”

Hardiman said that we as a state have to shift our focus to renewable energy and get on the bandwagon to bring jobs in that field to Illinois.

“I have presented a plan about fracking. Any company that violates environmental policies will be shuttered,” Hardiman said. “We will do it together.”

State Sen. Heather Steans (D-Chicago), filling in for Pritzker, said that Illinois needs to take the lead in converting from fossil-fuel plants.