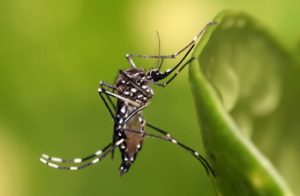 The most common mosquitoes that carry Zika are called aedes mosquito but Illinois health officials say there are no Zika-carrying mosquitoes in the state.

The Illinois Department of Public Health last week confirmed there were 46 cases of the Zika virus throughout Illinois, according to a spokesperson.

All of these cases are travel-based meaning the Zika virus was contracted outside of the country and brought back to the U.S, according to  Illinois Department of Public Health spokesperson Melany Arnold. She said there are no mosquitoes carrying the virus in Illinois, although some have now been found in Florida.

Arnold urges Illinois residents to take precautions when traveling abroad, especially in Central and South America and the Caribbean, where the virus is common.

“If they travel to one of these areas we recommend that they make sure to prevent against mosquito bites including wearing mosquito repellent, wearing long sleeves and pants and, if possible, staying in air conditioned places, definitely places that have screens and, if not, having a bed net,” Arnold said.

The IDPH recommends that pregnant women refrain from traveling to these areas for now, due to the severe birth defects the virus can cause.

Chief Operating Officer for the Cook County Department of Public Health, Dr. Terry Mason, M.D., said that the CCDPH has been working to get more information out to the public about how to prevent diseases spread by mosquitoes such as Zika and the West Nile virus through their ‘Fight the Bite’ campaign.

Medical Officer for the CCDPH, Dr. Kiran Joshi,  said the Fight the Bite campaign relies on the “three R’s” of prevention; remove, repel and repair.

According to the Fight the Bite website, Illinois residents should remove opportunities for mosquitoes to breed by pouring out any standing water around the home. They can repel mosquitoes by using insect repellent and remaining in air conditioned areas when possible.

Finally, the CCDPH urges Illinois residents to repair any tears in screen doors and windows to keep mosquitoes from entering the home.

The campaign will air prevention information commercials on CBS and will continue to provide information on their website and on posters in malls and grocery stores around Cook County, said Joshi.

Arnold said that the best repellents to use against Zika-carrying mosquitoes are products that contain deet and lemon eucalyptus.

Arnold stressed how important it is for residents to take these necessary precautions against contracting Zika as there is not yet a known vaccine for the virus.

“They’re working on a vaccine now but currently there is no vaccine and there is no treatment,” Arnold said.

About 80 percent of people that contract Zika do not realize that they have it because they do not show symptoms, she said.

Arnold encourages Illinois residents who have traveled to these regions recently to take precautions during sexual intercourse as the virus is transmitted sexually.

“For those that do exhibit symptoms they’re typically going to be mild and they include fever, rash, some joint pain and what’s called Conjunctivitis, which is red eyes,” she said. “The symptoms can last anywhere from just a couple of days to a week.”

The virus can affect unborn children if a woman contracts the virus when she is pregnant or has sex with someone with the virus shortly after it is contracted or when the person is still showing symptoms, Arnold said.

If a woman who is not pregnant contracts the Zika virus, any children that she may have in the future are not at risk for birth defects as long as the woman is fully rid of the virus upon conception.

Unit Director for Communicable Disease Control and Prevention Demian Christiansen said the Zika virus can cause a birth defect called Microcephaly resulting in an unusually small skull. He said that the risk of a mother with Zika giving birth to a child with Microcephaly is very significant, especially for women who contract the virus in the first or second trimester of their pregnancy.

Residents can get tested for the Zika virus if they are eligible, Christiansen said, and for now eligibility is limited to pregnant women or women attempting to become pregnant that may have been exposed to the virus whether it be from traveling to areas containing Zika mosquitoes themselves or having recent sexual relations with someone who has.

“We field a lot of questions from people who are worried about the virus but have not necessarily been exposed,” Christiansen said.

At present, Illinois residents actually have a higher risk of contracting the West Nile virus rather than Zika since mosquitoes carrying West Nile have been found in Illinois already.

“We have very close associations with our mosquito abatement districts and we will be notified if they identify any of those Zika mosquitoes in our area and then there would be efforts to eliminate those mosquitoes where they are found,” Christiansen said.

These mosquito extermination efforts would include spraying insecticides in areas where adult mosquitoes are common as well as sites where mosquito larvae are common such as dumpsters or other places with standing water, Mason said.