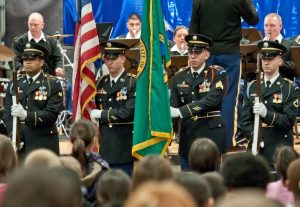 The I Corps Honor Guard presents flags at a school event March 23. The Music in Schools event was Sgt. Zachary Singer’s, (second from left), first event as the newest member of the honor guard.

Experts on stolen valor say a measure signed last week by Illinois Gov. Bruce Rauner is a small step toward holding individuals more accountable for pretending to be veterans.

The bill makes it a petty offense in Illinois for someone to get tangible benefits from lying about serving in the military, a measure similar to an already existing federal law.

People found guilty of violating the Illinois law could be fined $200. Violating the federal law carries the potential of a year behind bars.

Vietnam War veteran B.G. Burkett wrote a book about investigating so-called stolen valor. He said the Illinois law should be harsher. “I don’t want to say it’s worthless, but it’s not going to have much effect one way or the other.”

Burkett said he has found egregious examples over the decades of people, including police chiefs and politicians, pretending to be veterans. “I’d like to see them make it a felony, particularly if they’re getting money.”

Retired Navy SEAL Larry Bailey, who works alongside Burkett to expose fraudsters, said there’s something more powerful than a fine. “Actually the greatest punishment can be the public recognition as a fraud,” Bailey said.

Bailey said the new law will force the issue. “You can say, ‘Hey! Old so-and-so was found guilty of being a fraud. … Now he paid a $200 fine,’ so that validates that in terms of the law,” he said.