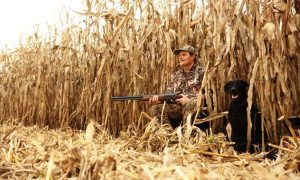 The state of Illinois expects to recover more than $65,000 in restitution and fines from hunting and fishing license fraud. (Photo courtesy of the IDNR)

More than $85,000 was fined to lawbreakers who doubled-up their hunting and fishing sports licenses by fraudulently claiming residency in two states at once in 2015-16.  Departments of Natural Resources in Indiana and Illinois teamed up in “Operation Double-Dip” to net 211 people in Illinois and 57 in Indiana who bought permits at a cheaper price.

“According to both Indiana and Illinois law state, no person may claim residency in more than one state at the same time for the purpose of purchasing resident hunting or fishing licenses,” said a press statement issued by the two state DNR agencies.

Cheating license buyers who claimed double residency took resources out of the system, said Sgt. David Hyatt of the Illinois Conservation police, in a statement.

“This is a case that protects the privileges of our legitimate resident hunters and ensures that each state receives the funding needed for Fish and Wildlife projects,” said Hyatt.

Many of the sports license holders had been “double dipping’” for several years, the investigation found. More than $65,000 in restitution and fines to Illinois residents with a “100 percent conviction rate,” by the Illinois Attorney General’s office and the Sangamon County State’s Attorney according to a press statement.  Many of the Illinois offenders had their licenses revoked for a period of time.

In Indiana, most of the cases are still pending, so the total amount of restitution and fines has not been determined. Officials expect to recover at least $20,000 in fines.