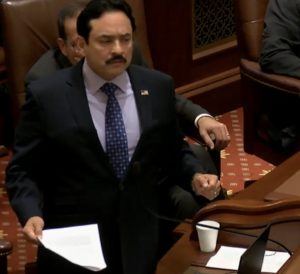 State Sen. Antonio Munoz (D-Chicago) leads the effort for an override of the governor’s veto of regulations for peer-to-peer car rental companies. “We have the opportunity in Illinois to set the standard for safety,” Munoz said. (BlueRoomStream.com)

Regulations on peer-to-peer car rental companies in Illinois are a step closer to reality.

The state Senate has overridden Gov. Bruce Rauner’s veto of legislation, putting rules in place for the companies that coordinate car owners renting their personal vehicles to consumers.

“The primary intent of this bill could not be more clear,” state Sen. Antonio Munoz (D-Chicago), who led the override effort. “It is about protecting those who rent vehicles through online car-sharing platforms by closing dangerous loopholes that allow these businesses to circumvent safety regulations, therefore, putting everyone on the road at risk.”

Munoz said car-sharing platforms, like Getaround and Turo, have stayed in a legislative gray area allowing them to operate relatively unchecked in Illinois. He said the firms have slipped through the regulatory cracks by saying they are not truly car rental companies but rather technology companies that “merely facilitate the rental of these vehicles.”

“This is a distinction without difference, which is why car-sharing companies should be held to the same safety standards as every other car rental company operating in Illinois,” Munoz said.

The state senator said that because current law is unclear, peer-to-peer companies take the position that certain requirements, such as addressing recall notices, do not apply to them.

“We have the opportunity in Illinois to set the standard for safety,” said Munoz, who is a retired Chicago police officer. “Millions of vehicles across the nation are currently operating with unsolved safety recalls. Renting these vehicles out to customers creates hazards for everyone on the road.”

Munoz’s override effort got the required three-fifths majority with 39 senators voting in favor of the action. 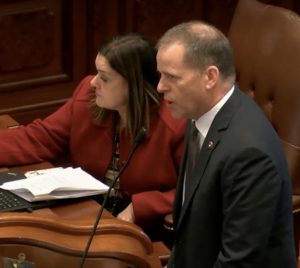 State Sen. Paul Schimpf (R-Waterloo) said peer-to-peer rentals need to be addressed, but felt the proposed legislation as written “is going to drive some of these ride-sharing businesses completely out of the state.” (BlueRoomStream.com)

In his veto of the legislation, Rauner said it is important to provide oversight of the new industry for consumers, “however, we should be careful not to unintentionally smother its growth before it has a chance to get off the ground.”

He said the rush to pass the peer-to-peer rental legislation at the end of the spring session didn’t get enough discussion or public input.

He said Munoz’s legislation is “potentially strangling a nascent new service industry while also adding a large tax increase on the millions of Illinoisans who desire to use this service as either car owners or car users — all without any meaningful time for public input or debate.”

Schimpf said it is a problem that needs to be addressed, but said, “I do feel if we pass this bill, this is going to drive some of these ride-sharing businesses completely out of the state.”

“I just think this bill is excessive. It’s not proportionate to the problem,” the Waterloo senator said.

Sally Greenberg, executive director of the National Consumers League, said it is only right that peer-to-peer rental companies face regulations like car-rental firms.

“Because peer-to-peer operators are facilitating commercial car rental transactions, they must be held to the same consumer protection standards as any other car rental or car-sharing service,” Greenberg said.

“This is all about protecting consumers,” said Sharky Laguana, founder and chief executive officer of Bandago, a national van rental company with a branch in Chicago, and board member of the American Car Rental Association.  “No matter where someone rents a vehicle, they deserve transparent pricing, peace of mind that it was inspected for safety, and the promise that someone will be there to help should something go wrong.”

Munoz’s legislation would also require peer-to-peer rental services to collect and remit the same taxes as other vehicle rental companies, which they are circumventing, proponents of the legislation said, even though vehicles on their platforms contribute to congestion and roadway wear and tear. While peer-to-peer companies market themselves as a way for individual car owners to make ends meet by renting out their personal vehicles, some have fleets consisting of a dozen or more vehicles, legislation proponents said.

“State government plays an important role in fostering a fair and competitive environment for the benefit of consumers, including their safety and use of taxpayer dollars,” said Jim East, vice president of government relations for Hertz Corp. “Today, peer-to-peer companies use taxpayer-funded public facilities without contributing to the infrastructure. Consumers benefit most when we all contribute our fair share.”

Further, peer-to-peer rental services try to claim they should not be subject to these regulations because they do not operate like other car rental companies, legislation proponents said, but noted these companies’ platforms are centered on renting out vehicles to consumers. In fact, nearly all car rental companies use digital platforms to facilitate transactions online, which is why it doesn’t make sense for peer-to-peer companies to demand tax breaks and special exemptions, the proponents said.

“I voted in favor of this legislation last spring because I believe it will protect consumers and includes important safety measures,” said state Sen. Sue Rezin (R-Morris), a co-sponsor. “My position has not changed.”

The override legislation now moves to the state House for consideration.