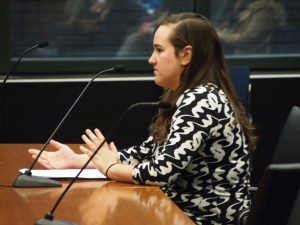 Chicago attorney Annika Kolasa speaks before a state House and Senate panel about the benefits of legalized marijuana for recreational use in Illinois. She said the habitual marijuana smoker would hand over $900 to the state in taxes annually, if pot was legalized. (Kevin Beese/Chronicle Media)

While legalized marijuana has been talked about as a state revenue source and a way to free up law enforcement resources for more pressing matters, Annika Kolasa sees a whole other benefit.

The Chicago attorney sees an increase in tourism, if the recreational use of marijuana becomes legal in Illinois.

“While Colorado, the West Coast, Massachusetts and Alaska have their charms, people would like something to do after they’re high and, regarding that, nothing can compare to Chicago’s arts offering, cultural history or night life,” Kolasa said to chuckles from the audience at a recent state House and Senate hearing on the potential economic impact of the legalized use of pot for recreational use.

“A novel intoxicant reliably regulated would encourage a wave of visitors from all of the surrounding states provided we do it first,” said Kolasa, who was part of hearings in Vermont when that state examined the issue and has done extensive research of the topic.

However, being the first Midwestern state to legalize marijuana use might not befall Illinois as Michigan is expected to have a measure on its November ballot to make pot legal.

Kolasa said lawmakers in Illinois and local governments have “already been creative finding pockets of money everywhere from public schools to pensions to soda pop to plastic bags.”

She said that Illinois is not alone in its financial plight, noting that all across the country states are facing fiscal issues and debating social service cuts.

In the meantime, Kolasa said, a huge source of revenue — marijuana smokers — has been largely ignored.

“A low estimate of $300 per ounce means the individual who habitually smokes an ounce a month pays $3,600 annually into the black market, untaxed,” Kolasa said. “At 25 percent sales tax and 7 percent corporate tax rates, that’s $900 per habitual smoker and $252 from the seller in state income tax that would be handed over willingly each year for the 20 percent of people doing the 80 percent of the purchasing.”

She said that we as a society have accepted alcohol and cigarettes despite their potential damaging qualities.

“Alcohol and nicotine are harmful drugs, yet they are taxed and regulated despite their destructive impacts on the body, society and the health care system,” Kolasa said “Although alcohol was implicated in more than 10,000 fatalities from car crashes last year, you would be hard-pressed to find a bar without a parking lot. That’s because America values individuals’ capacity to make decisions for themselves. Continued prohibition (of marijuana) is irrational.”

She noted that since 2014, Colorado has made more than $500 million in taxes from recreational and medical marijuana sales.

A Harvard University professor estimated that Illinois could save $235 million per year with the decriminalization of marijuana.

The Global Commission on Drug Policy contends that a different approach is needed than continuing to fight the futile war on drugs.

“The global war on drugs has failed, with devastating consequences for individuals and societies around the world,” commission members wrote in a report.

Commission members said that the time for legalizing marijuana has come.

“End the criminalization, marginalization and stigmatization of people who use drugs but who do no harm to others,” commissioners wrote. “Challenge rather than reinforce common misconceptions about drug markets, drug use and drug dependence. Encourage experimentation by governments with models of legal regulation of drugs to undermine the power of organized crime and safeguard the health and security of their citizens.

“This recommendation applies especially to cannabis, but we also encourage other experiments in decriminalization and legal regulation that can accomplish these objectives and provide models for others.”