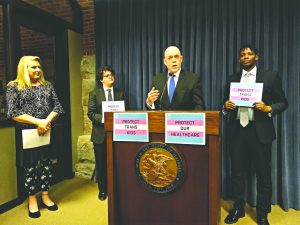 House Leader Greg Harris (D-Chicago) speaks during a news March 12 in Springfield against legislation that would ban some forms of health care for transgender persons under the age of 18. Harris was joined in a news conference by (from left) Dana Garber of Planned Parenthood, Grayson Alexander and Myles Davis. Those with Harris are representatives of the LGBTQ advocacy group Equality Illinois. Davis is the group’s spokesperson. (Photo by Grant Morgan/Capitol News Illinois)

SPRINGFIELD — LGBTQ advocates say they are “deeply disturbed” by legislation that would ban some forms of health care for transgender persons under the age of 18.

Filed by GOP Rep. Tom Morrison of Palatine, House Bill 3515 would add certain medical services such as sex-change procedures or the delivery of puberty-suppressing drugs to the list of acts punishable by revoking or suspending a doctor’s license.

Myles Davis, spokesperson for LGBTQ advocacy group Equality Illinois, called the bill an attack on families; the lesbian, gay, bisexual, transgender and queer community; and child health care in a news conference March 12, where various transgender persons stood alongside House Leader Greg Harris, a Democrat from Chicago, to voice their opposition to the bill.

“This bill takes health care options away from Illinois children just because of their identity,” Davis said.

“[The bill] is harmful physically, it is harmful mentally, it is anti-science, and it seems to be designed to be personally hurtful to a group of people very intentionally,” Harris added. “I just don’t know why this would be before the Legislature.”

The bill’s sponsor, however, says he’s been hearing from many parents who say their children are “moving too swiftly” to seek such medical services, which they might later regret.

“What we’re talking about here is life-changing surgeries or drugs that are given to minors, before we really have any deep studies about their long-term or short-term effects,” Morrison said. “And they are permanent effects.”

Morrison referenced an anecdotal story of a teenage girl who received a double mastectomy because she believed she was born in the wrong body.

“At age 22, she realized what a mistake she made, and she regrets she wasn’t given all the information she needed,” Morrison said. “Nor was she mature enough to make that kind of decision.”

Those at the news conference rebutted this by saying the choice to have such treatments and procedures is strictly between an individual, their family and their doctor.

“[The bill] takes away from a family the right to work with their children and medical professionals,” Harris said. “Government should not be interfering in these decisions, much less outright banning them.”

Asked whether it was necessary to make the medical procedures illegal, rather than promoting outreach efforts and ensuring accurate information available, Morrison said, “I need to give that more thought.”