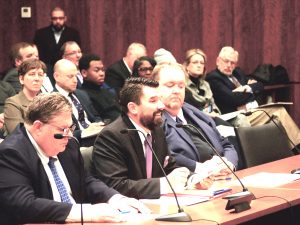 Ben Calcaterra (center), a pharmacist, tells state lawmakers about the risk of pharmacy deserts, “where patients have no easy route to a pharmacy.” Calcaterra talked to members of the state House’s Insurance and Prescription Drug committees Friday (March 1) along with Garth Reynolds (right), executive director of the Illinois Pharmacists Association, and Brian Kramer of the Illinois Association of Long Term Care Pharmacy Providers. (Photo by Kevin Beese/Chronicle Media)

Ben Calcaterra said it is not a coincidence that pharmacy benefit managers have regularly audited his prescriptions since he began speaking out about the prescription middle men.

Calcaterra, who operates three pharmacies in southern Illinois, said audits of his prescriptions have increased substantially since he began speaking out about drug costs.

“In 2018, I received as many audits as in the previous three years combined,” the pharmacist said.

Along that same storyline, he said that his three pharmacies are on pace to receive more than 100 audits of prescriptions this year.

During a joint hearing Friday of the state House’s Insurance and Prescription Drug committees, Calcaterra said because Illinois has no audit protection rules in place pharmacy benefit managers can conduct an audit “for any reason, without cause, at any time.”

He said a wrong keystroke on the computer can relate that a prescription was emailed in when it was, in fact, dropped off in person and that minor mistake can cause him to lose the reimbursement payment from the PBM.

The PBM audits take him away from the prescription counter where he could be better spending his time helping patients, Calcaterra said.

He said such issues, as well as pharmacies losing money on selling some drugs, increase the likelihood of pharmacy deserts “where patients have no easy route to a pharmacy.”

Garth Reynolds, executive director of the Illinois Pharmacists Association and a practicing pharmacist, said the impact is already being felt, noting that 1-in-7 pharmacies in Illinois closed between 2009 and 2015.

He said pharmacies in low-income and minority communities are the most at risk. Reynolds noted that a lack of pharmacies in struggling communities increases the likelihood of patients simply not taking the medication they need.

Reynolds said a recent study showed that individuals on a certain cholesterol medication were three times more likely to stop taking their medication if their regular pharmacy closed.

“We can turn this ship around. We can stop this flooding,” Reynolds said, “but we need to allow pharmacists to practice at the top of their license. We don’t do that here in Illinois. We’re severely underutilized. We’re treated as experts in taking something from a big bottle and putting it into a small bottle and putting a label around it and getting it to the drive-through. That’s not what we’re trained to do. That’s not what we’re capable of doing.”

He said pharmacy benefits managers are impacting the prescription drug industry in an negative way. 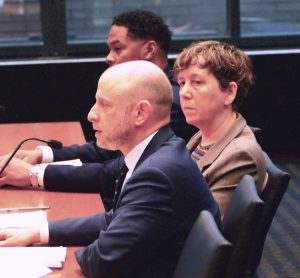 “The Illinois Pharmacists Association is gravely concerned with the high influence and prominence middle men like pharmacy benefit managers have on the prescription drug marketplace, and the ultimate cost and access to our patients,” Reynolds said.

None of the rebates that PBMs get from drug manufacturers get passed on to the patients, Reynolds said.

He noted that pharmacists are also regularly locked into gag clauses with certain PBMs that restrict them from telling a patient when a cheaper alternative to their medication exists.

“As a pharmacist who has practiced almost 20 years and have 25 years’ experience in the field, I never thought I would ever see a day where I would be prohibited from telling my patient there is a cheaper alternative, that there is a way they could save money and still have the best possible care,” Reynolds said.

As an example, he said, a woman could get an oral contraceptive where the co-pay is $35 where if he was able to show her the better route, the cash price would be $20. Instead of going to the patient, that extra $15 goes to the PBM, Reynolds said.

“Some would call these practices extortion, but it’s more like a hostage situation,” he told lawmakers. “Pharmacists and patients are being held at the mercy of these types of middle men who claim to have the best interest of the plan, sponsor and patient at heart, but their real interest is in increasing the bottom line and keeping the shareholders in mind.”

He said such maneuvers treat patients as pawns in the prescription drug game.

Reynolds said pharmacies add a small amount onto the prescription drug price to cover their overhead, but with such a small cut of the price, pharmacies continue to be at risk.

His peer Calcaterra said that pharmacists are overworked and pharmacies are understaffed because of the reimbursement landscape.

“Our citizens should have access to more services at the pharmacy counter, not struggling to find a pharmacy because they are closing their doors,” he said.

John Peller, CEO of the Chicago AIDS Foundation, said that the state and health care agencies need to work with drug companies, pharmacy benefit managers and insurers to develop solutions.

He said with people having access to the right drugs HIV and AIDS can be brought under control in a decade.

“We have the opportunity to end the HIV epidemic in Illinois and doing so will save a tremendous amount of money in health care costs over time,” Peller said. “But in order to do that, we do need to increase access to drugs and that’s going to cost money. So finding a solution to this (prescription drug cost) problem is essential.”

A representative of the AARP advocacy group for seniors said something has to be done in Illinois to make drugs more affordable for seniors, most of whom cannot easily absorb price increases.

“There shouldn’t have to be a tradeoff from taking a drug or affording your rent or buying groceries and that’s the dilemma a lot of people are facing,” said Andre Jordan, legislative liaison for AARP.

Jordan noted that 65 percent of older Americans are taking three or more drugs on a regular basis.

“The tradeoffs shouldn’t have to be so dire,” Jordan said. “Hopefully, something can be done soon and not just shift costs around within the health care system.”