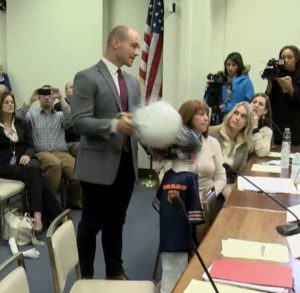 Chris Borland, former Big 10 defensive player of the year, shows the impact that continual helmet-to-helmet hits have. The former Wisconsin player was part of a panel supporting a ban on youth football in Illinois for players less than 12 years old. (Blueroomstream.com)

With Joliet Catholic and Providence high schools in her district, state Rep. Natalie Manley represents an area that takes its football seriously.

When fellow Democrat state Rep. Carol Sente of Vernon Hills approached the Joliet resident about supporting her legislation to ban tackle football for youths less than 12 years of age, Manley didn’t think there was any way she would support the bill.

“I was like ‘I’m not going to support this thing, these parents, this is going to be bad,’” Manley remembered, “but I promised her I would look at all the information I got and that I would talk to people. “

She said she talked to former players, coaches, parents and “fanatics” and thought, for sure, they would say to not touch the game.

“I was shocked. They told me that this was the best thing they ever heard,” Manley said at a state hearing on the topic last week. “I was shocked. I’m talking about people that live and breathe football, high school football.”

She asked them how the young players would get up to speed by the time they reached high school. The experts told her by concentrating on technique and learning the fundamentals of the game, nutrition, strength training and during flag football focusing on the area that they would tackle later: the waist.

Manley wound up being one of the members of the state House’s Mental Health Committee that supported advancing Sente’s bill to the House floor in an 11-9 vote. 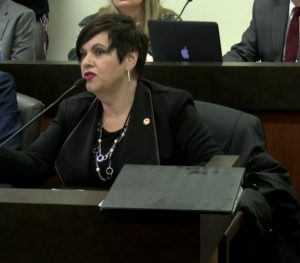 State Rep. Natalie Manley (D-Joliet) said she didn’t think there was any way representing a football hotbed that she would support a proposal to ban youth football for players less than 12 years old. She said, however, that players, coaches, parents and “fanatics” have told her the benefits of such a ban. (Blueroomstream.com)

Despite a panel in favor of the legislation speaking for nearly an hour, no one opposed to the legislation gave any input, raising eyebrows with some House members. Conroy, chair of the House’s Mental Health Committee, said that five individuals opposed to the proposal had signed up to give testimony but failed to appear.

Kifowit said proponents were given “preferential treatment” and said that it is not how the committee is supposed to function.

Sente’s legislation is dubbed the “Dave Duerson Act” for the Chicago Bear safety who took his own life in 2011, suffering from symptoms of chronic traumatic encephalopathy, a degenerative brain disease known to cause mood swings, depression and acts of rage. 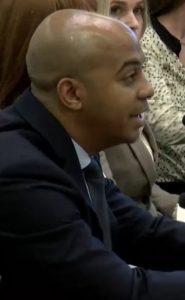 Tregg Duerson, the son of former Chicago Bear safety Dave Duerson who took his own life in 2011 after displaying symptoms of CTE, said the proposed legislation to ban youth football in Illinois for players less than 12 would protect future athletes and the game of football. (Blueroomstream.com)

“I can personally attest to the dangers of CTE and its effects on his life and his family’s life,” Duerson’s son, Tregg, told lawmakers. “He went from a Harvard-educated successful businessman to a shadow of himself. He struggled with bankruptcy, urges of physical assault, and also depression.”

Tregg Duerson said the bill would honor his father’s hope to help protect future athletes and the future of football.

Chris Nowinski, founder of the Concussion Legacy Foundation, said that almost everyone who has had a long career in football has the CTE disease.