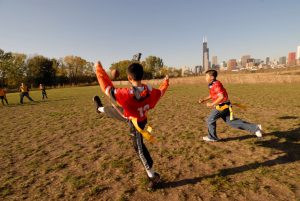 Being a 10-minute walk from a park in the biggest city in each county of the Chronicle readership area ranges from 98 percent in Chicago (Cook County) to 41 percent in Belleville (St. Clair County). (Photo courtesy of Rockford Park District)

A community’s affluence has little to do with its access to public recreation, a national nonprofit has found.

In launching its campaign to have all residents of urban areas — who make up 86 percent of the country’s population — to be within a 10-minute walk of a park, The Trust for Public Land has spent three years finding and mapping parks in urban areas. The group’s initial findings show that, contrary to conventional wisdom, access to public parks is not any better in areas where residents have higher household incomes.

“It’s definitely a mixed bag,” said Adrian Benepe, senior vice president and director of city park development for The Trust for Public Land. “We are just in our preliminary parks research, but we are actually finding that low-income communities have slightly better access to public parks compared to high-income communities.”

While no one is likely to hold a tag day anytime soon for Barrington’s residents, Benepe said more affluent communities like the northwest suburb are lacking something by not having more parks.

“More affluent communities often have different zoning. The perception is who needs parks if everybody has a big back yard,” Benepe said. “But that’s not true. We all need parks. We need the communal assembly that parks represent. We don’t have that in a lot of that in suburbs across America.”

Being a 10-minute walk from a park in the biggest city in each county of the Chronicle readership area ranges from 98 percent in Chicago (Cook County) to 41 percent in Belleville (St. Clair County). Information for DeKalb (DeKalb County) and Eureka (Woodford County) has yet to be tabulated by The Trust for Public Land.

Other county-population leaders — and where they stand on the 10-minute test of residents near parks — are:

Benepe noted that some cities, particularly in the Midwest, have absorbed other communities into their city limits to grow their tax base, but oftentimes that absorbed area does not have much park land.

The trust’s senior vice president said the 10-minute criteria is a standard measurement for planning purposes.

“City planners use the 10-minute walk regarding mass transit, shopping and schools, because that is about people’s limitation,” Benepe said. “After that, they are going to drive.”

He said the tracking program used for the nonprofit’s plotting of parks took into account impediments such as highways, streams, ponds and rivers.

“People are not going to grow wings and cross the freeway so we didn’t count something across a freeway as 10 minutes away,” Benepe said.

The Trust for Public Land has been working for more than 45 years to bring more parks and open space to communities across the country. Benepe said officials at the nonprofit realized they needed help to get more park land for people.

“We’ve been working to get every city resident within a 10-minute walk of a park,” Benepe said. “We’ve been doing it for decades, but we realized we were never going to move the needle even if we doubled or tripled our efforts.”

The Trust for Public Land decided it needed help and reached out to mayors across the country in the hopes of moving the needle within five years. Currently, 55 percent of Americans in urban areas live within a 10-minute walk of a park.

The Trust had 135 mayors, including the mayors of Chicago, Los Angeles and Dallas, come on board to commit to increasing park space.

Besides Chicago’s Rahm Emanuel, other Illinois mayors joining the effort are:

As competition for businesses intensifies across the country, the deciding factor, Benepe said, can sometimes be open space. He noted Volkswagen’s recent decision to locate in Chattanooga was partially made because of the city’s quality of life and outdoor spaces.

“It turns out you can’t have a great city without a great park system,” said Benepe, who served as former New York Mayor Michael Bloomberg’s parks commissioner. “Millennials want to live in cities with bike paths and bike access. Millennials are choosing cities over suburbs because of the parks.”

“For some communities, it is hard to keep the doors open and pay the police, let alone create parks,” he said.

He said there are creative ways to add park land to communities without a lot of expense, such as using empty lots as community gardens and turning abandoned railroad lines into green ways and bike paths.

He noted sometimes open space can be a more cost-effective answer to issues. He said communities with flooding issues or sanitary sewer backups can turn to a costly improvement project instead of stemming the problem with more open space.

“A town will say they do not have money for parks, but will spend tens of millions of dollars to treat storm water,” Benepe said.

See where your community stands in The Trust for Public Land’s measurement of residents within a 10-minute walk of a park and other open space information at https://parkserve.org/

— Nonprofit’s goal: All urban residents 10 minutes from a park —-