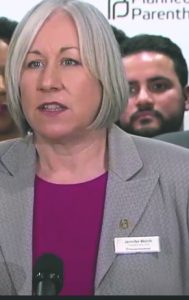 Jennifer Welch, president and CEO of Planned Parenthood of Illinois, talks about the importance of Pritzker’s executive order protecting and expanding women’s reproductive rights. “With an ultra-conservative majority on the U.S. Supreme Court, it is more critical than ever that Illinois is led by a governor who is unequivocal in his support of reproductive rights,” she said. (BlueRoomStream.com)

Gov. J.B. Pritzker has taken action to make Illinois “the most progressive state in the nation for women’s reproductive rights.”

“Thanks to the courageous advocates across our state, (House Bill) 40 is the law of the land,” Pritzker said at a Jan. 22 press conference with Lt. Gov. Juliana Stratton, Attorney General Kwame Raoul, state Rep. Sara Feigenholtz (D-Chicago) and others at Planned Parenthood’s Near North Health Center in Chicago. “I was proud to stand with you in that fight because a right is only a right if it can be exercised by everyone.”

“I’m proud to sign an executive order that will further protect and expand the right to choose in Illinois — and that will fully implement all the provisions of HB 40,” Pritzker added.

The governor’s executive order ensures the state fully enforces the house bill, which requires that all women in the state have coverage for abortions. The governor directed the state’s Department of Central Management Services to review all state employee group health insurance plans, identify barriers to women exercising their right to choose, and present recommendations to bring all health insurance plans into compliance with the law within the next two months.

“Women’s rights are human rights. It’s important that women have the right and ability to choose what is best for them and their bodies,” Stratton said. “(This executive order) makes it clear that our state is a leader in that respect.”

“Every woman should be able to make her own reproductive health decisions, regardless of her employment or income level,” state Sen. Heather Steans (D-Chicago), the Senate chief co-sponsor of HB 40, said in a press release. “We fought hard to pass legislation protecting this right and I am glad we have a governor ready to enforce it.”

“Governor Pritzker has been unflinchingly supportive of women and our right to safe, legal abortion,” said Feigenholtz, state representative of the 12th District. “Even before he was elected, Gov. Pritzker was in the trenches with us fighting for our rights and understood what it means to provide fairness and equity to women regardless of where they get their insurance. (This) is further proof of his commitment to women’s rights and keeping abortion safe and legal in Illinois.” 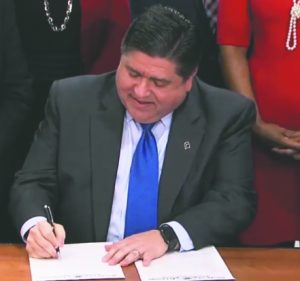 “I look forward to working with Gov. J.B. Pritzker and Lt. Gov. Juliana Stratton to ensure that all women have access to a full range of reproductive health care, including access to safe and legal abortion,” said Jennifer Welch, president and CEO of Planned Parenthood of Illinois. “With an ultra-conservative majority on the U.S. Supreme Court, it is more critical than ever that Illinois is led by a governor who is unequivocal in his support of reproductive rights.

“Our new governor’s commitment to reproductive freedom and the health care provided by Planned Parenthood has been steadfast for decades. I am confident that Governor Pritzker and his entire administration will protect Illinois as an oasis for reproductive health care, not only for Illinoisans, but for all people in surrounding states who must travel to receive the care they need.”

“Gov. Pritzker has never wavered on a woman’s right to choose, and in one of his first acts in office, he’s committing to fully enforce HB 40 to ensure all women have access to reproductive health care,” Terry Cosgrove, president and CEO of Personal PAC, a contributor to pro-choice candidates, said in a press release. “Illinois leads the nation when it comes to reproductive rights and Gov. Pritzker will ensure it stays that way.”