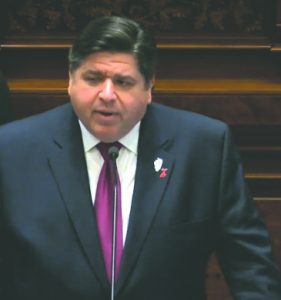 Gov. J.B. Pritzker is proposing a budget that includes legalized marijuana and sports betting, and a tax on insurance companies.

In his first budget address, given Feb. 20, Pritzker also called for paying down the state’s pension debt, tackling the state’s backlog of bills and providing more money for early childhood education.

“The road to normal conditions is in sight,” Pritzker said, paraphrasing the words of Gov. Henry Horner who took over the leadership of Illinois just after the start of the Great Depression. “However, to get there, we must begin an honest accounting of the struggles of the last few years and the challenges it left behind.”

Pritzker said that the state is faced with a $3.2 billion budget deficit and a $15 billion debt from unpaid bills. Last year alone, he said, the state paid out more than $700 million in late-payment penalties — enough to cover free four-year tuition for more than 12,000 students.

“We are dealing with a fundamental structural deficit that has existed for quite some time and spanned the administrations of several governors,” Pritzker said, “and it won’t be solved until we rethink our spending priorities and some basic revenue issues facing the state.

“During a time of unprecedented economic growth across the country, we lost four valuable years because of an ideological battle. That stops now.”

The governor said the proposed fiscal year 2020 budget is balanced, but noted that having a balanced budget is not enough.

“This is only year one of a multi-year endeavor, and, very importantly, it is built on the state’s current regressive tax structure that I do not favor and that puts the greatest burden on working families,” Pritzker said. “Not only is our tax system unfair, it’s also inadequate to solve our long-term financial challenges.”

The governor’s proposed budget calls for an estimated $1.1 billion in new revenue, including $170 million in licensing and other fees by the state legalizing and regulating adult-use marijuana and more than $200 million from sports betting fees and taxes.

Pritzker’s budget also calls for taxing insurance companies, specifically a managed care organization assessment to help cover the costs of the state’s Medicaid program — something that House Leader Greg Harris (D-Chicago) has been championing and that has been enacted in other states. The tax would generate an estimated $390 million in revenue to cover a portion of the state’s Medicaid costs.

The governor noted that 25 years ago, when the pension-payment schedule was put in place, the architects of it predicted that in fiscal year 2020, Illinois would spend $4.9 billion on pensions, nearly half of the current $9.1 billion price tag.

“This must not continue,” Pritzker said. “We must put the system on a more sustainable path — one that preserves pensions for the retirees who earned them, and, at the same time, allows us to grow our economy and grow our way out of the pension liability.”

The governor has proposed funding the state’s early childhood block grant program at $594 million, a $100 million increase from fiscal year 2019.

“It will allow us to begin the march toward universal preschool so that every child in Illinois will have a real opportunity to succeed,” Pritzker said. 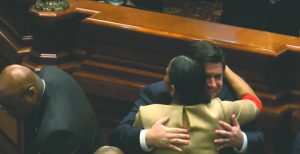 His budget also proposes a 5 percent funding increase for public universities and community colleges, as well as a $50 million increase in the Monetary Award Program to help 15,000 more low- and  moderate-income students attend college next year. It also includes $35 million for the second-year costs of the AIM High merit scholarship program for high-achieving students “so we can keep our best and brightest in Illinois.”

He said the budget also includes funding for needed smaller items such as the Advanced Placement Low-Income Test Fee Waiver.

“The $94 it costs to take an AP History exam is a huge burden for a low-income family,” Pritzker said. “We must be ever mindful of how we as a society inadvertently perpetuate a cycle of poverty and the ways, both large and small, that we can help people find a way out.”

Pritzker told the members of the legislature gathered for his address that he is ready to work with them to cure the state’s ills.

“Like you, I carry the burdens of this state in my heart — and despite the heavy load it lifts me up every day,” the governor said. “I share my purpose with you so that it may give poise and inspiration to our collective will — because I know the road ahead is hard, but I think it’s about time we all walk it together.”