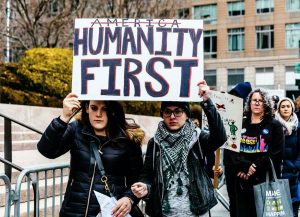 Protests against the Trump administration’s immigration policies are being planned in a dozen Illinois cities.

The protests will take place Saturday (June 30) as part of 463 rallies across the country.

“The executive order that Donald Trump signed is not the solution. It allows the indefinite incarceration of immigrant families in federal prisons, and there is still no plan to reunify the thousands of families that have been forcibly separated,” Anna Galland, executive director of MoveOn Civic Action, one of the organizers of the protests, said in an email. “Which is why we must continue to stand together at hundreds of events nationwide on Saturday, June 30, to say that families belong together — and free.”

Illinois rallies will be held Saturday in:

The Chicago event is expected to be the largest of the Illinois protests with more than 900 people already signed up to participate as of Friday (June 22).

More than 1,500 people had signed up as of Friday to attend Chicago area protests, including an event in Hammond, Ind. (11 a.m. at the Hammond Federal Building, 5400 Federal Plaza), just over the Illinois border.

More than 1,800 people had signed up to participate in one of the Illinois events.

“Thanks to powerful public pressure, the Trump administration has been forced to shift its outrageous treatment of immigrant children,” Galland said. “We have momentum — but we’re far from done.”

Galland said the stories coming out of the immigration centers have been shocking and heartbreaking: kids taken from breastfeeding moms, leaked audio of cries and shrieks from terrified children, images of kids in cages, reports of children being injected with anti-psychotic drugs against their will, and the defiance of President Donald Trump, Homeland Security Secretary Kirstjen Neilsen and Attorney General Jeff Sessions.

“In the face of this horror, MoveOn members and many others stood tall and said, ‘We have to be better than this.’ Galland said.

She noted that when U.S. Rep. Pramila Jayapal (D-Wash.) announced that she was working with MoveOn, the National Domestic Workers Alliance and other partners on a massive mobilization for Saturday, more than 150,000 people signed up for the more than 400 nationwide events in just 36 hours.

“We are absolutely ready to have a mass mobilization,” Jayapal said on MSNBC’s “All In with Chris Hayes.” “We see the outrage, and we see that this has to be taken right to Donald Trump to stop the family separation. … Nobody believes that there is any legislative reason, any policy reason, and certainly no moral reason to be separating these kids. This is not a political issue; this is about what’s right or wrong.”

“Every day, the administration is choosing to separate children from their families. And it’s within their power to change that. But they’re not only bragging about it, they’re using it to advance their political agenda,” explained Ai-jen Poo, director of the National Domestic Workers Alliance, who also appeared on “All In with Chris Hayes.” “This is not only about the children who are in detention, but also about the children who are watching. As parents, we need to do something about this.”

Galland said the public outcries have been heard by the White House.

“Because we raised our collective voice, Trump has been forced to backtrack,” Galland said. “One day after saying that this policy — which he and his administration created — was essential, he’s beginning to retreat. But let’s be clear: Trump’s announcement is not solving a crisis. Instead, it appears that he wants to modify his policy to detain infants, toddlers and other children with their parents — indefinitely, without due process. And many other children are still separated from their parents with no plans to reunite them.

“Again: Our national outrage has led to Trump and Nielsen backpedaling. Republicans are running scared from the moral crisis they manufactured. Which is why we’re doubling down as we build toward the national mobilization on June 30.”