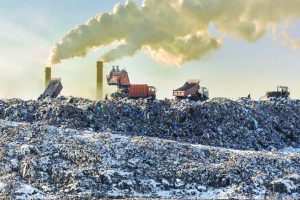 Landfills are one of the targets of the Environmental Protection Agency’s proposal to regulate methane more intensely.

In this week’s news digest for Illinois farmers and rural dwellers we have a report on policy issues the Illinois Farm Bureau will address during their annual meeting, along with reports on the EPA’s renewed quest to reduce U.S. methane emissions and the results of the Department of Agriculture’s annual Illinois Grain Tour. Please read on for more on these items …

BLOOMINGTON — The Illinois Farm Bureau has identified items of policy discussion for delegates to their annual meeting, which will be an in-person gathering at the Chicago Palmer House Hotel in December. The items include local, state and national matters relating to solar and wind energy, disaster assistance, conservation programs and agriculture education, according to a Nov. 5 article published by the IFB’s FarmWeek.

Breaking down the policy recommendations made by IFB delegates, national agriculture production issues to be addressed at the meeting include crop insurance, dairy programs, disaster assistance, conservation programs and solar energy. Proposals to support allowing farmers to update base acres and yields, making base acres portable, inflation-adjusted farm program payment limits and increased commodity loan rates were unanimously approved by the delegates.

Among the proposals to support a number of conservation programs, those gathering full committee support included creating a water quality credit, incentives for sequestering carbon through cover crops and publicly funded land grant research on soil carbon. Disaster assistance policies that received full committee approval include support for maintaining programs for animal disease prevention and management and federal spending to protect the agriculture industry from cyberattacks, according to the IFB report.

In addition, IFB’s Natural Resources Committee recommended policies allowing county governments to grant local Soil and Water Conservation Districts the right to inspect and identify violations of county land use regulations for both commercial wind and solar projects or Ag Impact Mitigation Agreements provisions during construction, maintenance and deconstruction for both types of projects.

Finally, the IFB State and Local Government Subcommittee supported limiting a governor’s power to declare states of emergency to four consecutive declarations, unless the legislature or an equally bipartisan legislative body approves the state of emergency. Dennis Smith, Vermilion County Farm Bureau president and chairman of the IFB State and Local Government Subcommittee, praised the democratic nature of the farm bureau’s policy development process. “It’s the only organization I know of that any member can give their county farm bureau an idea,” Smith said. “If the idea makes it through the resolutions committee process and is voted on by  the delegate body, it can become part of Illinois Farm Bureau policy. If it is part of IFB policy, it may become part of American Farm Bureau Federation policy. It’s unique.”

BLOOMINGTON — In other Illinois Farm Bureau news, the IFB said it is reviewing the U.S.

In a three-page EPA news release, the agriculture industry is not specifically mentioned as a leading source of methane emissions. Instead, EPA’s proposed new Clean Air Act targets new protections “to sharply reduce pollution from the oil and natural gas industry — including, for the first time, reductions from existing sources nationwide.” However, EPA is also “requesting information on additional sources of methane for the Agency to consider in developing a supplemental proposal to reduce emissions even further, the Nov. 2 news release states. The proposed new rules also target emissions from landfills, in addition to oil wells and rigs.

Methane can also be produced in measurable volumes through normal livestock digestion processes and from manure storage systems, the IFB noted.

The proposed new Clean Air Act will reduce 41 million tons of methane emissions from 2023-35, or the equivalent of 920 metric tons of carbon dioxide, according to EPA Administrator Michael S. Regan. “With this historic action, EPA is addressing existing sources from the oil and natural gas industry nationwide, in addition to updating rules for new sources, to ensure robust and lasting cuts in pollution across the country,” he said.

“The grain tour continues showcasing all that Illinois agriculture has to offer, even if it is virtually,” said Costello, in a Nov. 1 Illinois e-News release. “While we can’t wait for the day we can return to in-person tours, virtual tours have opened the door for more participants to experience what Illinois ag is all about.”

“Having one year under our belts of the virtual tour really helped when it came to planning for 2021,” said IDOA Bureau Chief of Marketing, Jackie Sambursky. “We were able to put together some amazing presentations to make the attendees feel like they were onsite with us and I think that shows in the numbers.”

Details on the U.S. EPA’s new Clean Air Act rule can be accessed online at

(Tim Alexander is a freelance…)